Have You Seen This Man? And other Miscellany

JUST WONDERING IF YOU’VE SEEN THIS GUY RECENTLY. I realize that old T.J. doesn’t ‘circulate’ much these days, but I’m doing my best to keep him visible. The $2 bill is my tip of choice at coffee shops and other such places. I’ve been doing it for years as a sort of schtick, and this year I added the following touch:

Why not a little self-promotion with my latte? Anyway, I was at the bank recently reloading my stash, and I got one that was already stamped – the first time that has happened. But no one has yet emailed me or left a comment saying they got one, so I have no idea where it’s been between when I spent it and when I got it back. So if you do happen across one of these, please drop me a line. I know this site isn’t exactly WheresGeorge.com, but it would still be fun to find out that someone got a stamped bill and checked out my blog as a result. So speak up, people!

I should also update everyone on how my effort for National Novel Writing Month (NaNoWriMo) turned out. So here you go:

Yep, I got to the 50,000 word mark with a day to spare. I’ve since taken a brief hiatus from writing it, with training for 5K races and upcoming Aikido test taking priority, but I’ll be back to it shortly. Last weekend I went to a followup session called, “You’ve Written a Novel – Now What?” which featured a local writer and a small press publisher explaining the best way to market your work and what kinds of things will annoy an editor or otherwise make him stop reading. Very useful information, given that I’m writing the Great Interstellar Novel! 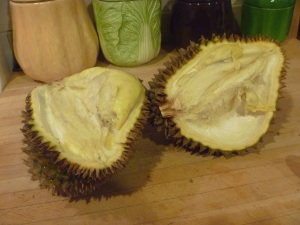 Finally, an adventure in food to relate. The day before my 51st birthday, I decided to sneak in one final thing I’d never done before, and settled on attempting to eat durian. For those of you who aren’t familiar with this exotic and odiferous Asian fruit, let’s just say that the first person to eat one must have been either very, very brave, or five minutes away from starving to death. Today it is considered a delicacy in some parts of the world, dead-skunk like aroma notwithstanding.

But where to find one? Surprisingly, it isn’t always available at Meijer. However, living in East San Francisco (a.k.a. Ann Arbor) has its advantages, and I procured one at a local Asian grocery store – the kind where nobody in the place speaks English. (Talk about a “fish out of water” feeling.) As I stood in line with the spiky football I was pretty sure that a couple of people were snickering, but it was in Chinese, so I have no idea who or what they may have been laughing at. Probably me, though.

Should I, or shouldn’t I? I have to, I’m wearing the magic sweatshirt.

Anyway, I got it home, and after getting on the Internet to find out how to open it, I managed to get a couple of spoonfuls down. So how was it? 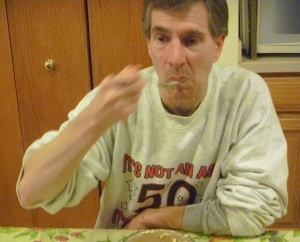 Okay, mission accomplished. But now the problem is I have most of the fruit left. What can I do with it? Sure can’t compost it, and the garbage man has his standards. There are a number of durian recipes on the Internet, however, including durian cheesecake and durian ice cream. Dare I try them? If I do, and manage to keep the HazMat team away, I’ll let you know.

2 responses to “Have You Seen This Man? And other Miscellany”