SOMETHING WAS WRONG WITH THE SCRIPT.

It was the second half of the Dances with Dirt – Devil’s Lake 50K near Baraboo, Wisconsin. This is normally where I start overtaking people who pass me in the first half. But as I picked my way down the two-mile decline from the rocky overlook to the aid station at the road, runners continued to pass me. And I was too gassed to do anything about it.

What was going on? Perhaps it was the 5:30 a.m. start, which meant I got up around 4:15. Or the 200 percent humidity that soaked everyone in sweat just a few miles in. Or the treacherous roots and rocks along the trail that had already spilled me once and kept threatening to snap off an ankle or two. Or it was just one of those days where you toss your goal time out the window and work on getting through the race. And it wasn’t gonna be easy.

The Devil’s Lake course, like the other DWD races, has its features that make it memorable. No fire ants like at Green Swamp, or walls of mud or wading down a river like at Gnaw Bone. But it took more out of me than any of the ultras I’ve ever run.

View from the top. 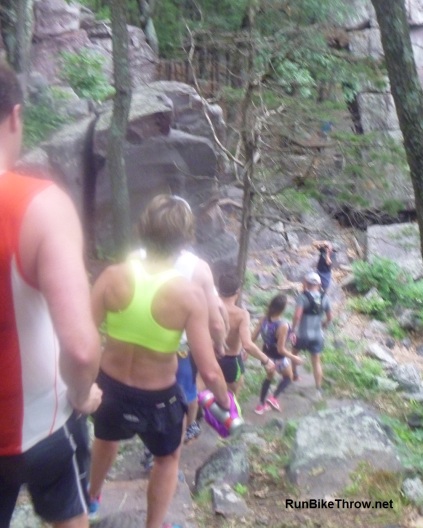 The signature climb up and down the rocks at the halfway point was a challenge, but the really enervating part was the frequent change in elevation. After the long climb up to the overlook (right above the “43” in the chart below) came the two-mile descent mentioned above. Then after a couple of miles through a grassy meadow, we turned around and went right back up (mile 22), with another dive downhill at the finish.

Tip for non-runners #1: Running downhill in a trail ultra is neither easy nor fun. Especially if it’s steep. And after mile 15. Skeptics are welcome to consult any ultrarunner, or try it themselves.

It was just as fun as it looks.

My whole race went in cycles. After mile 6 I felt like crap. Then I recovered, improved, and at mile 10 I felt invincible. Two miles later I felt like crap again. Rinse and repeat. I was at one of my “feel like crap” moments when I got to the 25-mile aid station where my friend Tracy was volunteering. “You didn’t look too happy,” she told me later. After sucking down Sprite, Gatorade, and water, and pouring more over my steaming head, I pulled myself away and staggered down the trail for the final leg.

“Just do your best,” Tracy called after me. 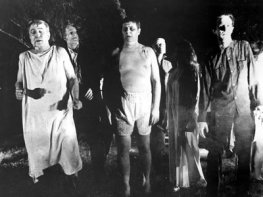 You all look awesome! Keep it up!
(Licensed under Public domain via Wikimedia Commons.)

Tip for non-runners #2: Standard procedure on an ultra run is to say positive things to other runners. During the two-way traffic in the meadow, the air was filled with “Good job!” and “Looking awesome” as runners went by each other. Telling the truth (e.g. “Man, you look like death”) is not cricket.

And yet, after all that, I was in for a couple of surprises. With about three miles to go I got a burst of energy, picked up the pace, and began passing people, even someone who’d flown by me a half mile back. I crossed the finish line in just over six hours – nearly 45 minutes faster than my finish time at Gnaw Bone. For all my worries about tanking the race, I’d finished third in my age group and in the top 20 percent overall.

And all those folks who had passed me? They must have been running the shorter races – the marathon and half marathon, which shared a lot of the 50K course.

This guy’s shirt read, “Raw Vegan 50K”. As he was about half my age and I kept up with him most of the race, I call that a victory for meat.

After stretching, my standard post-race half beer, some lunch, and a nice rest on a blanket, I was much restored and able to admit I’d had a good time. Here were some other things to appreciate about the event:

– The Running Fit crew, who did their usual awesome job of setting up the event, supporting and tracking all the runners, and then cleaning up so thoroughly there was no clue on Sunday morning that they’d ever been there.

– The towels soaked in ice water at the Bug Pit (mile 20). Talk about a lifesaver.

– The jugs of water at mile 7.5, just where I needed it. Whoever put it there, thank you so much!

– The clouds covering the sky all day. I have no idea how I could have dealt with the sun being out.

One of the 50 mile finishers. On that course? Truly awesome!

Next up: the Pterodactyl Triathlon on Wednesday.

2 responses to “On the Rocks: DWD Devil’s Lake 50K Recap”