“HERE’S THE WORLD’S MOST PROLIFIC RUNNER,” I heard over the loudspeaker as I charged across the finish line. As much charge as I could muster wearing snowshoes, but I tried my best to make it look good.

Saturday was the Bigfoot Snowshoe 5K race in Traverse City. One year ago here I began my quest to run every Running Fit event in 2014. Now one year later I was getting public props for continuing the streak. It’s fun to be notorious! 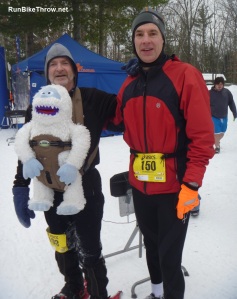 Course conditions were good, with plenty of snow on the trails at Timber Ridge. The temperature was about 20 degrees but with a bitter wind, so it was damn chilly in the starting queue. My fingers were already numb from putting on my snowshoes and stayed cold throughout the race, even in heavy gloves. Took my feet over an hour to fully recover afterward, too. But hey, it was a fun time. Right?

Racing snowshoes come in several types of length, width, and style, but they all have an anchor at the toe and a floating heel. You slip your running shoes into the bindings and use a rubber strap around the heel. The running form is slightly wider so you don’t hit your ankles, and there is more knee lift. And snow flies everywhere from your shoes and those ahead of you, so wearing a waterproof outer layer is a really good idea.

The super snowshoes I wore for the race. See below for how I got them. Also notice the ice balls on the socks!

A good set of racing snowshoes starts at around $200, so like many racers I rented some and picked them up at the resort on race morning. Last year I really liked the pair I got. This year I was handed a set with odd bindings that came loose during a test run. I went back in to see if a different model was available.

The race director, also named Jeff, was standing near the shoe table. “Having a problem?” he asked me as I made the exchange. “Let me know if those don’t work for you. I have a pair you could use.” I thanked him but figured the second pair would work. They laced up just fine, but out in the deep snow the toe on my right shoe dug under the rim and locked up. That was a recipe for a multitude of face plants in a race.

Jeff noticed my trouble and beckoned me over to his van, where he pulled out a sleek red pair with sneakers already locked in. “These are the fastest shoes in the West,” he said. The shoes were a size larger than mine but fit fine with my heavy socks. I had no time to try them out; the race was about to start. I got in line a minute before the gun. But here I was, wearing the race director’s top-notch snowshoes. Incredible!

For me, the toughest part of a 5K is the first half mile – it takes that long for my body to catch up aerobically. In snowshoes, I’m going nowhere near as fast as a road race, but the effort has the same effect. Last year I started near the back and ended up behind a lot of walkers. This year I started farther up and was able to go as fast as I wanted, and after the first mile I felt good and began passing other racers in earnest.

On the trail (actually from 2014, but it was pretty much the same this year).

I thanked Jeff profusely for helping me out and being so generous with his best snowshoes. A box of homemade truffles just might be headed his way. (Don’t tell him.) 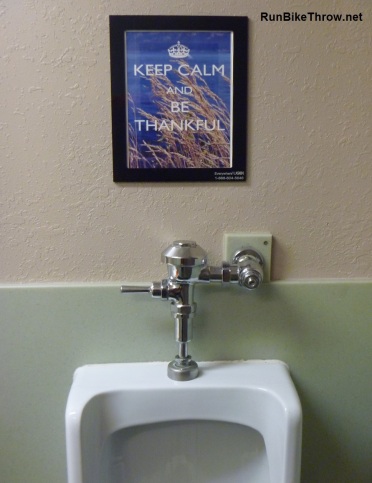 In the men’s room at the resort. I’m not sure why it appealed to me so much. Frozen brain, maybe.