THE BIG EVENT at Run Woodstock is one week away, and I’m gearing up for it by gearing it down a little. Yes, it’s the hardest training period of any distance runner – taper time!

So I will be doing my very best to work out less, rest more, and eat more. I’ll get through it somehow. Actually, I’m looking forward to a little break from Body Specs. Today’s workout at 90 degrees and 90 percent humidity had me streaming sweat, leaving puddles on the mat at each station. But it’s been that kind of summer.

Stop doing this for a whole week? Oh, man!

I’ve been wondering about a few things that happened to me this past week. Perhaps some of you could provide some insights or similar experiences. 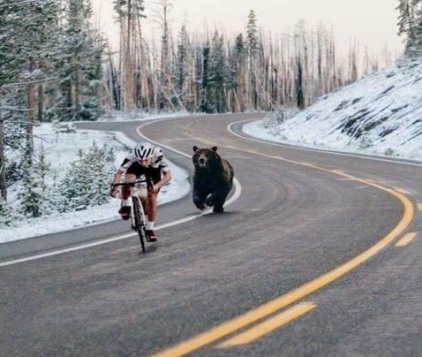 Maybe this was the difference?

BTW, the I-275 Metro Trail from 5 Mile Road to Meadowbrook Road is a handy way to go north on a bike but I wouldn’t recommend it as a pleasure ride. As I was advised by another trail runner, it’s variable in pavement quality and the noise from the freeway is incredible. Perhaps it’s amplified by the retaining walls on the west side. The good news is that multi-purpose paths continue to head north for several more miles.

“Not really,” I said, reflexibly. My destination was about 7 miles away. As the entire ride was over 50 miles, I was pleased I only had that little bit left. But what makes a ride or run “long” depends on one’s point of view, after all. In track and field a 5K is considered a “middle distance” and 10K is “long distance.” By contrast, in the world of ultrarunning the “short run” is the 50K, and no one even talks about shorter races.

What is this “marathon” distance you speak of.

It reminded me of my trip to Chicago in 2011, where the train station attendants said I might want to take a bus for the “long” 8-block trip to the convention center. When I told them I was there for the marathon, they agreed I “could walk it.” (BTW, the walk inside the convention center to get my race bib was longer than the walk to the center.)

Why does this happen? I’m guessing it’s due to the reduced field of view. When all you can see is what’s illuminated by your headlamp, even familiar territory can seem like the middle of nowhere. And the noises change, too, from the man-made to the animal. Between the near-total darkness, gnats in my eyes, and crickets and frogs echoing all around, it really did feel like a different world from the same path I’d taken just a half hour earlier.

And just think – a week from now, I get to run all night long. The race begins at 4:00 p.m. Friday, and with luck I will be finishing sometime around sunrise Saturday morning, just as the 50K and 50-milers toe the starting line. (Yeah, those “short distance” guys.)

Stay tuned – I’ll let you know after Labor Day how my weekend “training” went. (Isn’t that kind of ironic, that “Labor Day” is celebrated as a day off?)