THE BAD NEWS I SUSPECTED WAS COMING arrived a few days ago. The Mt. Hood 50, the other UTMB qualifying race I’d signed up for, has been cancelled.

It’s a July race, so I was holding out hope. But Oregon has extended its group restrictions through September, so that was that. It’s not such a bad thing, though. It meant either driving across the country and back, or risking a plane flight, something my wife was definitely NOT in favor of.

So I’m now officially committed to no races at all. I’m a stay-at-home runner for the foreseeable future, and my tales of adventure will be confined to my house and my neighborhood.

I know what you’re thinking. What kind of adventures could a stay-at-home runner possibly have? Well, here we go.

The running event companies may not be doing actual races, but virtual races are going strong. For a lot of people they are better than nothing, and they like the “bling” that comes with them. I don’t need more T-shirts or medals, but if that’s what gets you out and moving, by all means go for it.

Confession time: I did one virtual race, and because of the medal. But only because it struck right at my heart. I’ve played D&D (Dungeons and Dragons) for over forty years, and this virtual 20K came with a medal shaped like the 20-sided die (the icosahedron, for you geometry geeks) which the game is famous for. 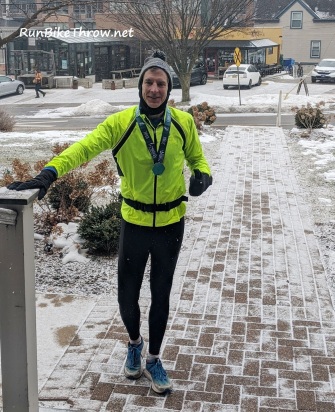 BTW, I’m still playing D&D through all this, with my regular gaming group, via the “roll20” video app instead of meeting in person. It’s nearly as good, and has saved me countless calories from binge eating at someone’s house. Something about group D&D begs for continuous eating. Less of a problem at home.

RF Events, a racing company that would be going all out normally right now, is offering monthly challenges instead. May’s challenge, dubbed “50K in May” is to run at least one mile every day of the month. At the end, you’ll have at least 31 miles, which, as all trail runners know, is a 50K. Not a bad plan, and they could use the income, so I signed up. It’s a “pay what you want” challenge, with swag you could buy if you wanted to.

Some of us (ahem) far prefer to do the entire distance at once. And nothing says I can’t go out there and do a 50K run for fun. But the “run every day” part is enough of a challenge. I have never done a running streak of any meaningful kind, and I take total rest days pretty seriously. Since I decided to take on the challenge, I need to define “rest” at least for this month.

So far, so good. I’m averaging about 5-6 miles per day, with a Saturday long run as usual, and “rest days” of two miles or so. Most of it is slow and easy, but I’ve included some tempo work and hill work, too. My legs are feeling the cumulative fatigue, but that also keeps me from training too hard right now.

For those of you who don’t think this is quite enough of a challenge, I’m following a blog of someone (longruntom) who’s running 1K per number of the day. That was 1K on May 1, 2K on May 2, and so on, up to 31K on May 31. The daily distance is getting interesting for him now. Have a look at his progress (May 17), if you dare.

My run club leaders continue to put out a weekly email, with suggested routes (solo) and encouragement to keep running. In a recent email, they warned us about how bad the ticks are around here, and to check carefully after a run.

I’ve seen some in our yard from time to time, but have never worried about them. Until today. I’d done some weeding in our garden beds, in blue jeans, and when I took them off a little bit ago, I found one happily attached to my calf. That was after this morning, when I removed one from my hair. How it got there is anyone’s guess. My cats profess total innocence, and perhaps I brought it in myself.

Both of them got the alcohol bath treatment, as recommended by websites everywhere.

These little forkers are Hard. To. Kill. I even slammed a book on one (on our table) last night, and it still kept crawling along. And they can go months without food, so don’t try to starve them out, either. Alcohol or high heat is about the only thing that does the trick. So put your pillows in the dryer if you’re worried about it.

And, finally, (for now), I have been hard at work on a novel. That’s the good news. The bad news is that what takes place in it would be impossible under current circumstances. Hopefully by the time I finish it, life will have returned to a semblance of normalcy. Either that, or I’ll have to set it in 2015, or 2050.

I am now releasing the first two chapters to a select few intimates for review and feedback. Perhaps sometime soon I will expand my review audience. If you are interested in such things, drop me a private email – jeff (at) runbikethrow (dot) net, and I will keep you posted. Only if you really want to. In the meantime, thanks for reading my blog, and please stay safe out there.