Through a Glass (Door), Noisily

SOME MARTIAL ARTISTS BREAK BOARDS WITH THEIR FEET; others break bricks with their hands. Me? I shatter glass doors with my nose.

The latest (and only) demonstration of my talent occurred during my visit to my employer’s Costa Rica facility. I’d borrowed the office of the head engineer to phone my boss back in Michigan. He asked me a question that required my laptop, which I’d left in the conference room. “Just a minute,” I said, “I’ll run and get it.” I meant it literally; when you need something in Aikido class, you run there and back to maximize productive training time, and that habit carries over into the rest of my life. So I got up and sprinted for the conference room. 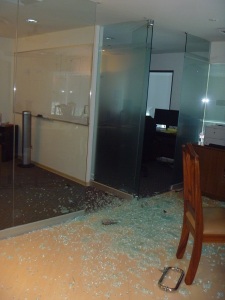 Marvin’s office has a glass door, which I had left open when I entered. But while I was on the phone, the door had somehow closed, and the glass was so clean I didn’t see it. The photograph to the right shows the result. I have to say that watching the door obliterate itself was quite spectacular, not to mention cacophonous. (They told me that on the floor below it sounded like a low jet flyover.) Fortunately, the safety glass lived up to its name and I suffered only two bruises, to my nose and my ego.

There are no images of the act itself, but if you’re interested in such things, here’s an online video that captures an event quite similar to mine. I’m going to assume the guy in the video also believes it is not worth repeating, so please don’t try this at home, folks.

I’m not likely to earn any cred from my dojo, either. In Aikido, we don’t break things (on purpose, anyway), and while door shattering might make for a spectacular new technique, the cleanup time alone would make it impractical. I am wondering, however, if my nose needs to take its own Kyu test.

This entry was posted in Aikido. Bookmark the permalink.

One response to “Through a Glass (Door), Noisily”