Two months after my crash-and-burn DNF at Glacier Ridge, I successfully completed the Voyageur Trail Ultra in Carlton, Minnesota, a little 50-mile jaunt to Duluth and back along a picturesque, and often treacherous, set of trails.

The Voyageur was a dress rehearsal for my upcoming 100K attempt at Run Woodstock, and I ran it with just two goals: 1) finish the damn thing, and 2) have fun doing it. And I did! I ran the entire race on an even keel, and though my feet and legs were plenty sore, I had energy in reserve. I’ll sure need it for those 12 extra miles in September!

That doesn’t mean the race was easy – far from it. In some ways it was the toughest ultra I’ve run to date.  Here’s a recap of this memorable race. I will let the pictures do most of the talking. Enjoy!

Some of the course isn’t so much a trail as a suggestion of one. The official name of this part is the Carlton Trail, but I prefer what the Chippewa call it: Crazy-Paleface-Break-Ankle. (*) 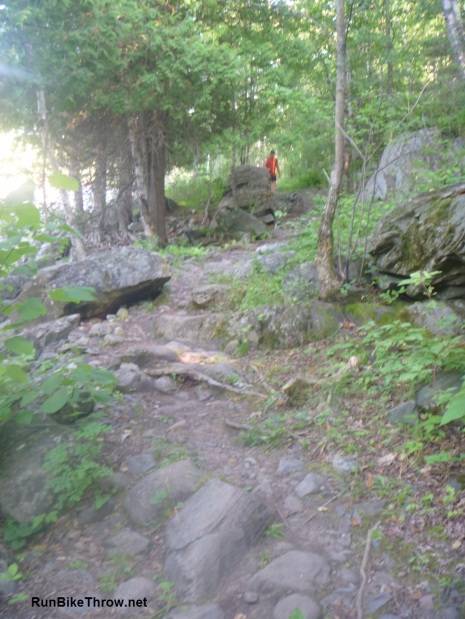 The ropes in this section are NOT optional. You won’t get up (or back down) without them.

The good news here is, you’re out of the woods. But you’ve entered the infamous Power Lines. There were about five of these ravines to deal with – muddy on the way out, broiling hot on the way back. And don’t slip.

And a big shout-out to this guy (Joe) who was running his first-ever 50-miler, and supporting the Noah’s Hope Foundation. “Sure is a big difference from a 5K,” he told me. Wait – for real? Yep, he’d run nothing in between. And he finished!

Next up: The changes that made all the difference.

(*) Okay, maybe the Chippewa don’t really call it that, but I’m sure any of them would agree with it.