I ran an ultramarathon at Run Woodstock last week. It just wasn’t the one I signed up for. 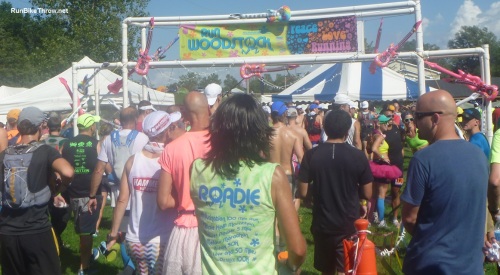 Yes, yours truly experienced his first DNF (Did Not Finish) in a race. After looking forward all summer to my first 100K trail race, I succumbed to the elements and called it off at 56K. 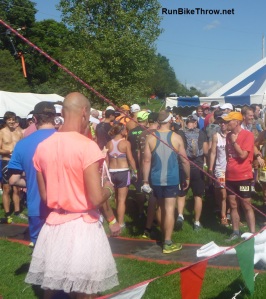 No wonder it’s called the “Hallucination 100K” – we haven’t even started and I’m already hallucinating.

I’m a bit bummed out, naturally, but more surprised than anything. I’d signed up for 12 miles farther than I’ve ever done at one time, but I felt ready. Given my successes with multiple 50Ks this year (all strong finishes) and first triathlons (finished upright) I anticipated no trouble. It was just a case of banging out the miles, slow and steady. But it was not to be.

So what happened? I’d written in a previous post that I knew there would be limits on what I’d be able to accomplish, but that I hadn’t found them yet. Found one! And it wasn’t a bit fun, although I sure learned a lot from it. Here’s a recap.

Race day started out better than expected. Instead of the predicted rain at race start, it was sunny and 92 degrees. “Congratulations,” we heard as we stood in the starting queue. “Today is officially the hottest day of 2014 so far.” Standing around in shorts and tech shirt, it wasn’t so bad. Once we started running, however, the effects were felt quickly. 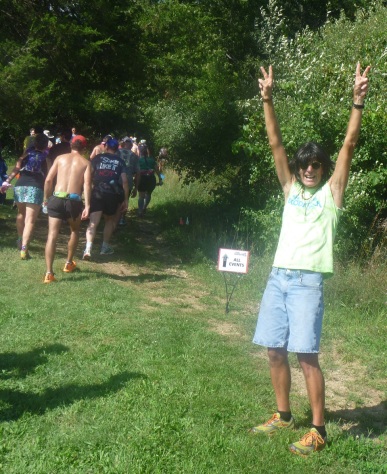 I knew what to do – don’t start too fast, take salt at the aid stations, and above all, stay hydrated. And I did, drinking more than I’ve ever done in an ultra. And yet I sweated so much it’s possible it wasn’t enough. I was grateful for the extra gear I’d packed. Even if it didn’t rain, ditching sweat-soaked clothes for dry ones would be welcome.

The severe weather sirens sounded near the end of my first loop. The predicted storms had missed us so far, but now one was headed right for us. I’d been anxious to complete the loop before dark anyway, so here was some extra motivation to pick it up a bit. I made it back to base camp in the nick of time.

As I sat in the gear tent changing into dry socks, the surge hit us – intense wind gusts that lifted up the tent walls all around us, causing considerable oohs and aaahs. 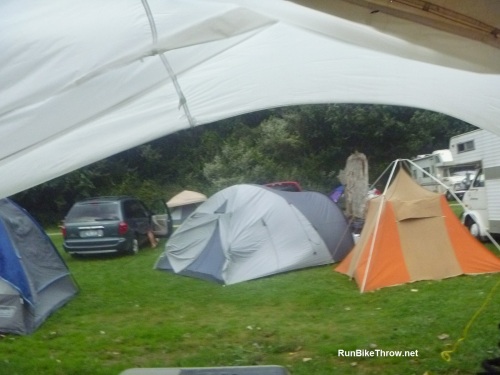 That tent wall is supposed to be touching the ground.

“Go on! You’re safe in the woods!” someone yelled to a runner hesitating on the start of his next loop. (Boy, was he wrong – see below.) But as another gust threatened to blow us to Hell – literally – I decided to sit it out. Ten minutes and a 20-degree temperature drop later, I headed out on my second loop.

I’d taken a rain jacket with me, and as a drizzle turned into a steady rain, I put it on. This kept me dry and warm at the time, but turned out to be a bad decision, as I kept sweating under it. Instead, I should have taken off my shirt to keep cool. 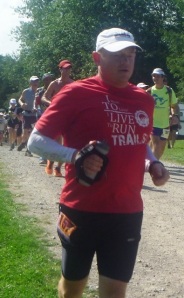 It was dark now, but the trail was well marked with fluorescent flags and I had no trouble staying on course. But in the dark, the distances seemed to stretch out even more than usual on a trail, the first half especially. Instead of working to stay calm and patient, I got annoyed and began to dread repeating the loop twice more. But I met up with a small group in the final segment and finished the second loop feeling good. Just another 50K to go!

The trouble started as I took off my shoes to dry my feet and put on fresh socks. When I put my soaked, muddy shoes back on and stood up, they were too tight. Either they’d shrunk, or my feet had swelled, or both. That was okay – I had my Hokas in the gear bag, so I put them on – and they were tight, too. But as they were dry, I figured they would stretch enough, and out I went for the third loop.

I was feeling a little unwell and walked quite a bit of the first two miles. When we hit the gravel trail, I began jogging and felt better, passing and chatting with a few other runners. As we returned to the woods, I returned to walking. Something was going wrong with me in a hurry. It felt much like the second half of the Dexter-Ann Arbor half marathon – growing nausea and flushed in the head. I was overheated.

Just get to Gracie’s, (the aid station) I told myself. There you can get some ice and rest. A couple of runners passed me and asked how I was doing. “Hanging in there,” I told them. Then, out of nowhere, the thought came, persistent and insistent. Get to Gracie’s and tell them you’re done.

WTF? Where did that come from? Never before, in any race, had I ever even thought about dropping out. Nor was this a mental debate. I would be done. Period. Still, I resisted a bit.

I thought it was funny when I took it…

When I got to Gracie’s, I sat and applied ice to my neck for a while. But I did not improve. If anything, I felt worse. So I went over to the staff and told them I was done. They gave me a ride back to camp. “No worries,” the race director said when I told him what had happened. “You live to run another day.”

I sat in the first aid station with ice, and after a half hour or so I felt better. Vital signs were okay, although I realize now they never took my temperature, so I don’t really know if I had heat exhaustion. Maybe if I’d just waited longer at Gracie’s I could have continued. On the other hand, passing out on the trail at night would have been a bad thing. So no real regrets.

Also in the first aid area was a young woman wrapped in a blanket and looking miserable. She’d been on the trail during the storm surge – and a tree had fallen on her. No serious harm, fortunately, but she was out – and she’d signed up for the 100-miler.

“I’ve had the worst luck with this race,” she told me. “Last year I was at mile 98, and I got clipped by a guy on a mountain bike.” 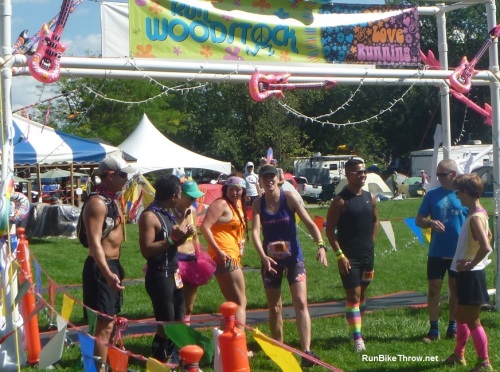 These folks are Super Slammers – five 100-mile races in one year. And people call *me* crazy.

Next, I’ll be looking more at the mistakes I made and what I can do better in my next attempt at a race over 50 miles. Report following discussion with my coach.

Run Strong in Boston, Everyone!

On the eve of the 2014 Boston Marathon, I’d like to wish all the PR Fitness runners who will be there, especially Coach Marie and her husband Rob, a safe and happy race. A live feed will be online at http://watchlive.baa.org starting at 9:30 a.m. Eastern time Monday, and you can bet I’ll be watching.

Much has been written and said in the past week about last year’s bombing, but none of the runners were dwelling on that. Everyone was fired up to go to Boston and run strong. Nobody is forgetting what happened, but in my experience, runners are among the most positive and forward-looking people I know, which is a big reason why I enjoy running with a group so much.

Rob passed along this link to a CNN article written by PR Fitness runner John Farah. In this short piece he powerfully describes his 2013 experience and why he felt he had to return for this year’s marathon. Please read it. It’s worth it, I promise.
http://www.cnn.com/2014/04/15/health/boston-marathon-running-again/index.html

It’s Hard to Take it Easy

THIS STANDING AROUND BIT IS TOUGH, MAN.

The Ann Arbor Marathon was last Sunday. Sounds like a natural for me to be in it, right? But it was too close to my next race. So instead, I biked downtown to join some of my PR Fitness friends in cheering on the runners.

I only felt a little guilty. 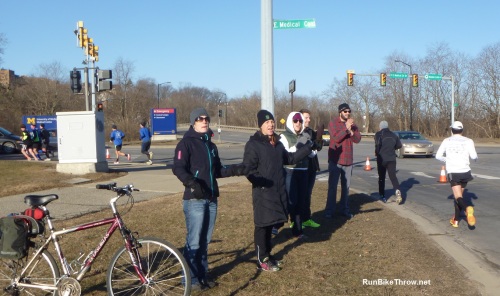 Cheering them on at mile 10, just before the monster hill.

Rest is important. Rest is vital to improvement. Rest is underrated. All runners know this, or at least we’ve heard it plenty of times, and even repeated it amongst ourselves. But how much of this wisdom is actually internalized is up for debate. Consider, for example, a conversation that might happen at a Saturday morning group run:

Fellow runner: “So, Jeff, how far are you going today?”
Me: “Oh, just a quick eight today. Resting up. Race next weekend and all.”
Fellow runner: “Smart choice. Rest is important. Good luck at your race.”

Now, the same conversation as translated by my ego:

Fellow runner: “So, Jeff, how far are you going today?” Please ask me back, so I can tell you about my upcoming double Ironman.
Me: “Oh, just a quick eight today…” Boy, that sounds lame. Bet he thinks I’m a world-class wimp.

Fellow runner: “Smart choice. Rest is important…” I shall smirk inwardly at your wimpiness during my 20-mile warmup.

Now this is NOT how runners think. We all train at our own level, for our own goals, and support each other in accomplishing them. But that didn’t stop my competitive nature from whispering why aren’t you out there in my ear Sunday morning. 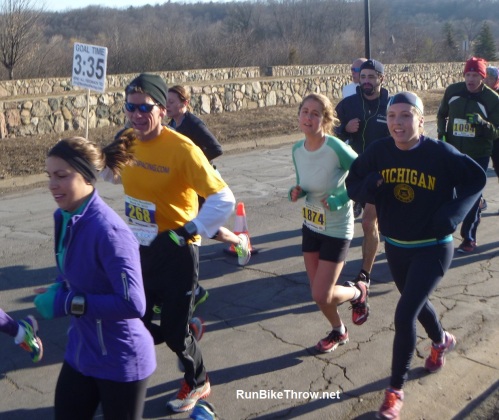 Yeah, Jeff, wouldn’t this be lots more fun than standing there shivering?

It didn’t help that it was cold enough (25 degrees) that I’d have been far more comfortable running. And that later in church several people asked me what distance I’d done. (Well, that was my fault for not changing out of my bike gear and 2012 marathon shirt.)

But there was a bright side. As the temperature neared 60 in the afternoon, I got back on the bike for another 14 miles. I’ve been itching for weeks to get back to cycling, and that ride was just the scratch I needed. Looking forward to more! 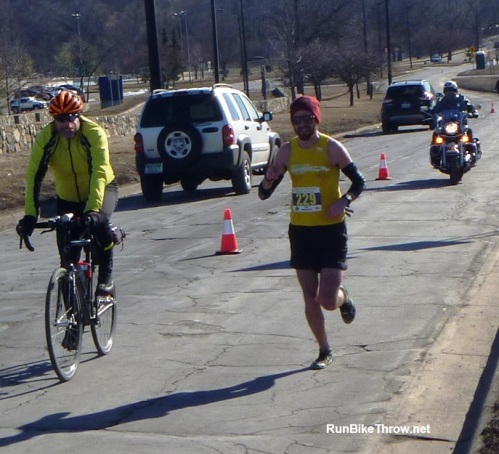 The lead marathoner (and eventual winner) as he approaches the monster hill for the second time.

Next up: the Martian Invasion of Races in Dearborn, where I will do the half marathon, and the Trail Marathon Weekend at the end of April. It’s the logical (and smart) choice to get in some rest while I can. I’ll do my best.