Preparing for the Invasion, Marathon-Style

The Martians invade Michigan on Saturday. This is NOT a rumor – I have evidence!

Hard to believe that this will be my first road marathon in four years. I’ve run thousands of miles since 2012, at every distance from 5K to 100K, except for the marathon. Mainly because at distances over the half (13.1 miles) I much prefer trail running. So why am I running a road marathon this weekend, and with a specific goal time in mind?

The hardest part of all this, somewhat ironically, is these final few days before the race. With the training load cut way back and extra time to think about the race, I have that twitchy feeling of, “There must be something left to do!” Well, let’s check the three main components of racing readiness and see what I stand.

Physical: My body is as ready as it can be. The strength workouts, distance runs, and speedwork have done their job. Cutting back on the training load allows my body to heal and reduces the chance of an overuse injury. So this week has been about slow runs and light workouts, “keeping the edge sharp” for Saturday morning.

Tuesday night, for example, I went out with PR Fitness for a 5-6 mile run. I kept my heart rate under 145, which meant after a mile I was by myself. But instead of trying to keep up with them, I enjoyed the relaxed pace and did some gear checks (see below).

Mental: As an experienced ultrarunner, I have no worries about the distance. Rather, the challenge will be holding it together at a much faster pace than my ultras. How will I respond when things start hurting late in the race, and there’s a strong temptation to slow down? Fortunately, I have my experience at the Richmond half marathon to boost my confidence. No guarantees, but I have the motivation to run strong and push past the pain.

Logistical: Just as important to a successful race are my choices in clothing, gear, fueling and hydration, and pace (course strategy). This is where I learned the most from Tuesday night’s run. The weather was nearly identical to the forecast for race morning – sunny and chilly, with some winds. This allowed me to dress in my expected race day outfit. I learned that my layering strategy was just fine, but the wrap I was using as a hat would not suffice.

For hydration, I want to carry at least one water bottle so I can consume salt tablets and Gu when I want to, and not have to wait for an aid station or deal with those tiny cups. I originally planned to clip a bottle onto my belt but it bounced too much when full, and caused the belt to slip. So another solution was needed. I could carry the bottle (and did for most of Tuesday’s run) but that’s a strain on the arms over a long run.

Fortunately, the local running shop was close by and still open, and I settled on this little number – the “Trail Mix Plus” from Nathan. 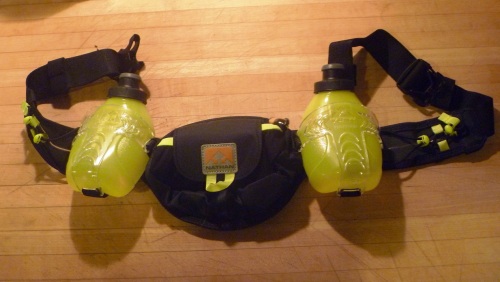 It cinches more snugly than my other belt, and the bottles won’t jiggle. I may look like a bit of a dork wearing this, but what else is new? And if it gets me across the finish line five minutes faster, bring it on! Heck, I’d wear head-to-toe pink if it made me faster (underwear, too). And a sports bra (although I’d insist on a sub-3 hour guarantee).

So I’d say all systems are go. Or so I thought, until my daughter posted this helpful comic from The Oatmeal on how to run a marathon. Click the image for a very humorous take on the marathon from someone who’s been there. 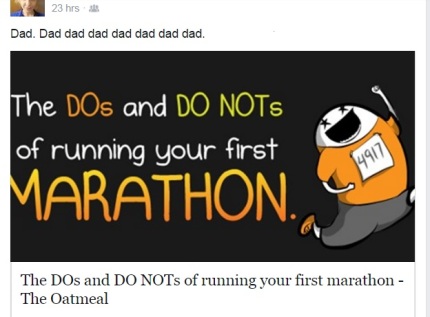 Alas, it’s too late to drop what I’ve done and follow his suggestions. Maybe next time!

Group run Saturday morning was all right. It was 35 degrees, raining, and the melting snow either created icy patches or flooded the streets in massive puddles or running streams. But it was tropical paradise compared to a week ago. Finally, it didn’t feel like Mother Nature was trying to kill me whenever I stepped outside.

Yes, I wore gloves in my office. Long underwear, too (not shown).

Later that day I was talking with someone about my fitness activities and the events I have planned for this year, including several ultramarathons and my first-ever triathlons. “How do you find the time to train?” she asked, knowing the type of training needed to perform well at these events.

Well, it isn’t easy. With a full-time job, a house to maintain, cats to serve, and plenty of other interests, it would be easy to claim that I didn’t have the time to exercise regularly. But I have been able to integrate exercise into my life without it seeming like a large sacrifice of my otherwise “free” time. Here are a few ways I’ve done this:

Saturday mornings. These used to be my “sleep in” days, and I would typically stay in bed until 10:00. Now I roll out of bed at 7:00, toss on running clothes, and head downtown for a run of 10 miles or more with PR Fitness. By 10:00 I’ve exercised, gotten some fresh air, and enjoyed time with my running friends. I go to bed earlier on Friday nights to make this possible, but that’s probably healthier for me too. 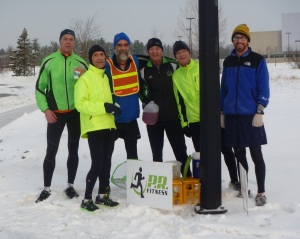 I may be crazy, but I have company.

Afternoon walks. I did these long before I became a regular runner, and I still use them when I need a break. Just fifteen minutes is one mile, enough to reinvigorate body and mind and help burn off that after-lunch cookie (or two).

One of the fringe benefits of a summer night bike ride.

Evening short runs and bike rides. In the warmer months I can hop on my bike at 6:00 p.m. and get in a 20-mile trip before dark. Even one hour on the bike can be a good workout, or a relaxing cure for a tough day at work. And year-round I run Wednesday nights with PR Fitness.

So what am I getting out of all this? The physical benefits, for sure. I’m stronger and fitter than I’ve ever been. But that by itself doesn’t explain why running and cycling has become such an important part of my life. There are mental and spiritual benefits, too. A slow, easy run or bike ride are not much of a physical challenge, but they create a sense of peace and well-being that releases stress and helps restore my sense of perspective. The petty concerns of day-to-day life drop away, and I can spend some time in the moment, feeling connected with life, the universe, and everything (*).

Next time (or soon) I will talk about something else I’m working on, so far with mixed success, to work further on a greater sense of spirituality. Stay tuned.