LAST SUNDAY WAS THE FIRST LONG RIDE ON MY NEW BIKE, and as you can imply from the title, the “maiden voyage” of the good ship TriCross included a mishap. Not Titanic-style, fortunately – more like the Exxon Valdez.

After a long afternoon of gardening and home repairs, it was time to enjoy the beautiful evening on the road, getting to know more about what this new bike can do. I hadn’t planned a route or a length, so I just headed west toward Dexter or Chelsea. Stopping at the Dexter Dairy Queen occurred to me, since it’s been a stop or the finish line for many a run and ride. So I swung north on Baker Road, and a plan fell into place: a Tour de DQ! Okay, there were only two DQs in it, but the length would be ideal at around 20 miles, and I’d get in some exercise on the uphill stretches heading back east. 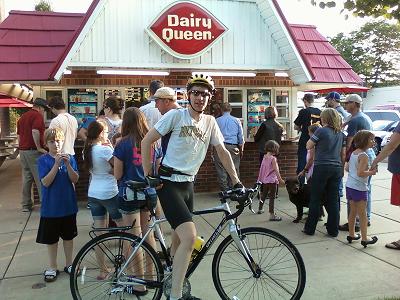 The Dexter DQ was the first stop at about six miles in. I felt a little guilty for not buying anything, but they weren’t lacking for customers, and I knew I would be back soon. Through Dexter, east along Huron River Drive, then southward up a laborious mile-plus climb, where the difference in performance between this bike and my hybrid was particularly evident. The lighter weight and lower riding position has resulted in several more MPH at my normal effort, and a normally challenging stretch seemed to pass very quickly. Good motivation for more trips to the cider mill this fall.

My second stop was the DQ on Stadium. With only a three-mile leg home to complete, now was the time to celebrate. I tried the blended coffee and ice cream drink they call a Moolatte. (I felt like just pointing to its picture, but I sucked it up and pronounced it when ordering.) After consuming some of it, I placed the cup in my water bottle rack for the trip home. On my hybrid, doing this has never been a problem. But I hadn’t counted on how a lighter bike reacts to road bumps. I wasn’t twenty yards away before the cup dropped onto the road and burst open. I said something very inappropriate within earshot of a Dairy Queen, and dismounted.

The spill had created a pool of light brown sludge that looked like a raccoon had just tossed its cookies. But half the contents had stayed in the cup. I retrieved it, placed it more securely in the rack, and resumed the ride. I was annoyed but philosophical about it, telling myself that I had saved half the calories this way. And about a quarter mile later, I saved the other half. As I hit a bump, the cup sprang out and dumped its remaining contents onto my left shoe (locked to the pedal, no way to dodge). Nothing for it but to clean up as best I could and head stickily for home.

Overall, I call the ride a success, although there were two other side effects besides the tragic waste of ice cream. First, my knees were sore for two days, which was odd because they felt fine after the ride. Probably pushed a bit too hard on the uphills. Second, I went back to the DQ after Aikido class on Monday and got a replacement Moolatte, which for some reason didn’t taste as good as Sunday’s had. Perhaps Spock was right: the having isn’t always as pleasurable as the wanting. (I’ll buy a Moolatte for anyone who can identify the episode in which he says this. If you got to the end of this post, you deserve one.)