“The key to being strong,” Geoff said, his fingertips digging deeply into my side, “is to relax.” 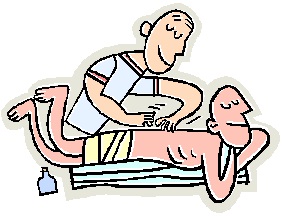 I wanted to agree, but it was difficult with my subscapularis muscle stubbornly refusing to take his advice. Nor could I nod with my head secured face down in a padded loop. So I settled for an acknowledging grunt, which also allowed me to express my discomfort without whimpering.

The problem was tense shoulders, affecting my Aikido form. During preparation for my 1st Kyu test last December, Sensei had reminded me many times to lower them, usually by looking my way and shrugging. I’d done my best to keep them relaxed, but the photos from the test and Sensei’s critique letter clearly indicated that under pressure, the shoulders had reverted to old habits. This was something I could not fix quickly, but would require effort to overcome.

The first part of fixing the problem, I decided, was to find out how big it was. I began checking my posture several times a day. To my surprise, I’ve discovered my shoulders raised and tense when I really don’t expect them to be, such as:
……..– Running at a moderate pace
……..– Driving
……..– Pushing a shopping cart
……..– Typing at my desk, including while writing this post. Down, boys! Down!

The second part is to work on replacing the bad habit with a better one. So shoulder relaxation is now part of every workout routine, including pre-run warmups and pre-Aikido stretches. And whenever I catch myself with raised shoulders, I relax them and hold the position for a while, trying to build muscle memory.

Finally, I wanted to do something to loosen up the accumulated tension and stiffness in my neck and shoulders. So every two weeks, I get an hour-long massage with emphasis on the upper body. The place I settled on is in downtown Ann Arbor above a cafe. At the top is a landing with a bench where you leave your shoes underneath. It reminded me of the dojo, and I soon found out why.

As Geoff shook my hand I thought I recognized him, and he told me he thought he knew me from somewhere. Then I mentioned my Aikido training, and it clicked; he was also a student at our school. He wasn’t training actively anymore, but he’d attended the YMCA class, which I went to on occasion. This made one part of the massage very easy; when I told him my shoulder was a little achy from too many jump breakfalls, he knew exactly what I was talking about.

He got right to work, pushing, probing, and generally letting my bunched-up muscles know that he meant business. I’m not a big fan of pain, one reason I’ve avoided massage, the deep tissue kind in particular, but I wanted results badly enough that I didn’t complain. Much.

To distract myself, we continued talking about Aikido, such as the recent increased emphasis on circular movements and focus on a smooth form, and that for this year a beginning technique is now part of an advanced test. (Which means the advanced student must do it perfectly, with understanding of all parts of the technique, in order to score well.) I mentioned that I had the tendency to tense up, especially when learning a new technique on or a test, causing my shoulders to rise. This was the context of his comment on relaxing. A well-executed technique relies mainly on a relaxed, balanced feeling instead of raw muscle strength.

At the end, Geoff asked me if I was feeling more tension on one side more than the other. When I said no, he mentioned that he’d noticed my right shoulder needed more work. “Well,” I said, “I always carry my backpack slung over my right shoulder.”

4 thoughts on “Under Pressure”