Note: I also published this article in AnnArbor.com. See the article for a photo of Bob and Katie standing next to their destroyed house last year.

In the late afternoon of March 15, 2012, while hail pummeled my car and winds rattled the windows in my Saline office,  a Category F3 tornado ripped through Dexter. It destroyed or damaged more than 200 homes, ripped massive trees out of the ground, and caused more than $9 million in damage. Dexter residents Bob and Katie Jazwinski were among the hardest hit, their home almost completely leveled.

The family was unhurt, but they were emotionally shaken and needed help with housing and supplies. To their relief and gratitude, volunteers from the community and local nonprofit groups quickly showed up. The organization Poured-Out, which assists at disaster sites worldwide, helped clean up the Jazwinskis’ property, and local fundraisers provided much-needed financial assistance. 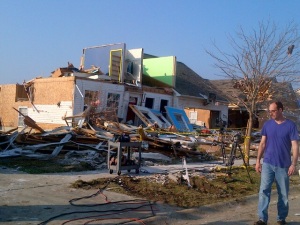 Some of the damage wreaked by the 2012 tornado. Photo courtesy of State Farm via Creative Commons (Flickr)

One year later, their house and their lives rebuilt, the Jazwinskis want to show their appreciation for all the help they and so many others received. And as runners, track coaches, and hosts of Jazz Running Camps, they came up with a fitting way to do it. The result is the “Dexter F3.1 Tornado Run/Walk” at Hudson Mills Metropark on Friday, March 15.

The 5K run/walk is sponsored by Hudson Mills, Women In Motion and Jazz Running, with the goal, as the race brochure says, “of encouraging healthy lifestyles along with promoting fun & fitness through the enjoyment of running & walking.” All proceeds will go to nonprofit organizations such as Poured-Out.

“They helped us so much after the tornado,” Bob explained. “We wanted to provide a way for Dexter to give back.”

The event begins at 7:00 p.m., with free park admission after 5:00 p.m. for participants. Everyone gets glow sticks, tornado t-shirts, and a coffee mug or beer glass just for taking part. Awards will be presented to the top finishers overall and in age groups. There will also be chances to win a free registration to the Jazz Running Camp, HuronPark annual stickers, Running Fit gift cards, and Women in Motion gear.

Bob reported that as of March 1 they had registered nearly 300 people, including “many people that are not what you would call runners,” but who had signed up anyway. They expect total attendance to be in the neighborhood of 500. I’ve signed up. How about joining us and making it 501 or more?

Join me at the Tornado Run! Register online at this link.

The Jazwinskis moved back into their rebuilt house on February 7, after eleven months of living in a rental. “It was nice,” Bob said of their temporary house, “but it wasn’t a place we could call home. Now it’s a mess back at the house, but it’s an awesome mess to have.” He is happy to report that the family is all healthy and doing well, including their latest addition, Sammi, born on October 4.

Bonus: Click here for some video footage of the tornado from spectators at Hudson Mills that day. And hey, why let something like a little tornado interfere with a game of disc golf?