Recovery Rewards, and the Spartan Penalty

“Jeff, you look five years younger,” Skip said to me as I walked onto the mat at Body Specs. “Your vacation must have agreed with you.”

It was my first day back from up north, and while I’d done some running and cycling, I’d also made myself get plenty of rest. Sleep does sometimes get shortchanged at home; there’s so damn much to DO!

Skip’s sentiment was echoed later by someone who visits our office about once a month. “You look good,” he said. “Your color is healthy.”

I knew I’d resumed my training routine too soon after Kettle Moraine, but hadn’t noticed any difference in the mirror. Sort of like watching kids grow up; it’s when you haven’t seen them for a while that you realize how much they’ve changed.

But I have noticed a difference in how I’m feeling. This month my energy and stamina are much improved. It really became evident last Wednesday. I started the day with a 6 a.m. 10K run, followed by a sweaty and reasonably brutal noon workout at Body Specs, then spent the afternoon and evening working Zero Waste at the T-Rex Triathlon. I left the park at 10:00 p.m. And I felt great. 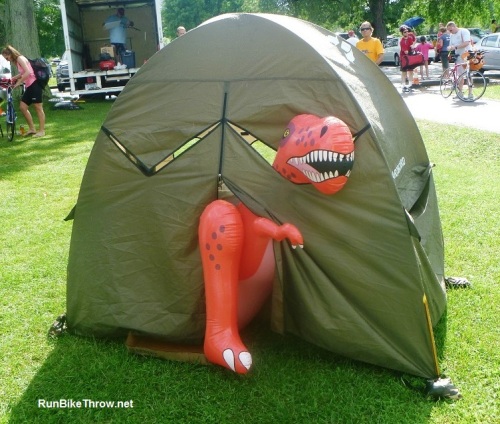 Saturday morning I ran 16 miles with PR Fitness. As it was my longest run in two months, I decided to go aerobic, with a target heart rate of 135-140. I should do most long runs this way, but it’s easy to get sucked into a faster group. This time I swallowed my ego and let the pack go on ahead. (It was hard. Really hard.) 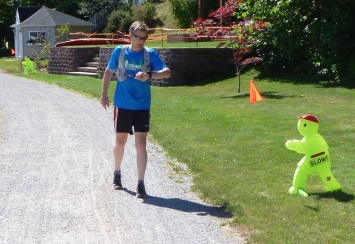 All went well until around mile 12, when my heart rate climbed to 145-150 and stubbornly remained there despite slowing my pace. May have been fatigue, dehydration, low blood sugar, or all three. But still a successful run. And man, did my post-race reward (a latte float with chocolate ice cream) taste good.

The energy rebound is coming just in time. For one thing, I’ll be starting Aikido again in September. And this month, I took up the #22 Kill Pushup Challenge, which is 22 pushups a day for 22 days. Any kind of pushups count, so I’ve been varying them. Skip helped me out on Day 1 by assigning me extension pushups. The photo below shows me in the middle of one. Trust me, behind that extended arm is a face full of pain. 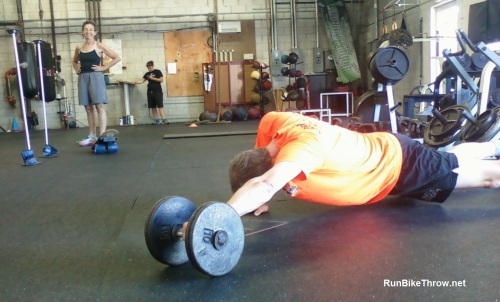 I’ve also done decline pushups, five-finger (fingers extended, tent-style), and hands on wobble board. And yesterday I forgot to do them, so today I assigned myself the Spartan Race failure penalty:

These are called burpees. The penalty for failing an obstacle at a Spartan Race is 30 of them. Every time you fail an obstacle. Ooof.

Am I running Spartan Races, then? Not yet, but I was recently provided with an advance reading copy of Joe De Sena’s new book, Spartan Fit! in exchange for reviewing it and spreading the word about it. 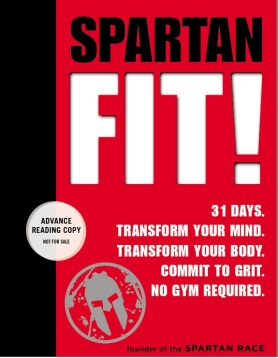 Review to follow, but I will say you would benefit from this book if you’re interested in improving your ability to face life’s obstacles of any kind. Stay tuned!

THAT’S WHAT I GET FOR SHOWING OFF.

I woke up yesterday morning feeling kind of iffy. Sniffles, lower energy, a little achy all over. Just part of winter? Maybe. I’d also had a vigorous Monday session at Body Specs followed by a tempo run on Tuesday, so feeling a bit run down wasn’t surprising. Still, I worried I might be coming down with something.

I debated about my noon workout, finally deciding to go. If I really wasn’t up for it, I could end the session early. But I thought it would be appropriate to give my trainers a heads-up.

I got there, changed, and began loosening up. One of the trainers nodded at me as I worked with the body blade. “Hi, Jeff, how are you?” she said. But before I could reply, she turned away to watch someone else. I should have taken this as a sign; I was just fine, of course. What other answer was there?

It’s tougher than it looks.

I went over to the high bars to stretch out my arms and shoulders. As my upper body was still a bit stiff, I did a pull-up just to check things out. It went well, so I knocked out a few more. I admit at this point I was feeling rather pleased with myself.

Unfortunately, Skip, the head trainer, was watching. “You might want to save yourself,” he said. “I’ve got something special planned for you today.”

Great, he had energy to spare. Notably, however, he did not offer to do 25 percent of my workout.

This is one of the conundrums (conumdrae?) of this gym. They want to know if you’re injured or sick, but wimpiness will earn you no sympathy whatever. If you’re there, you’re ready to go at it! So at it I went. While it wasn’t as brutal as some sessions I’ve had, it was an energetic one. And as promised, Skip gave me something special.

“Since you can do pull-ups,” he said, “you can do the advanced version.” This meant alternating grip (one hand under, one hand over), and switching hands at the top of the pull-up. “Quickly. You’ll drop fast.” He demonstrated. Naturally, he made it look pretty easy. Let’s just say I wasn’t as graceful. Add to that some deadlifts and rows, medicine ball tosses, abs work, weighted rope jumping, and more. Rinse and repeat. 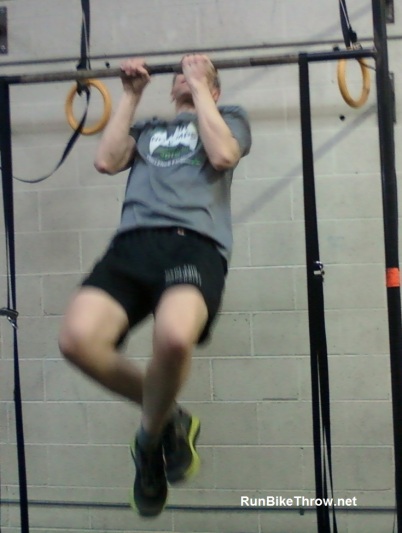 I think this was officially number 41.

Somehow I got through it all, and as I did my cooldown routine I noticed I was feeling pretty good. My Aikido instructor once joked (I think) that the cure for everything that ailed you was breakfalls. I think you can add Body Specs to the list.

“Well,” I said to Skip as I was leaving, “whatever bug I had this morning is dead.”

Skip smiled. “We killed it,” he said.

“So how are you feeling?” coach Marie asked me yesterday before our Wednesday night run at the new lululemon store. “Feeling good,” I told her, “ready to run.” 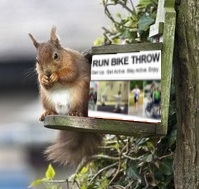 Last night’s six-miler with PR Fitness was my first run since completing the 50-miler at Run Woodstock, and I’d been looking forward to it all week. I understand the need to rest and recover after an ultramarathon, but I was starting to get squirrelly. My legs started out a bit sluggish, but after a mile or so I was back in the groove. It helped that it was a beautiful warm evening and that the rest of the group was upbeat too.

I’m convinced that one reason I became a regular runner is the attitude of the people I’ve run with. Whether it’s a group run, a small 5K, or a major marathon, everyone has been so happy to be there, it couldn’t help but rub off on me. Emotions are contagious, and so, I believe is energy. How can you not get fired up to run when everyone else is raring to go? 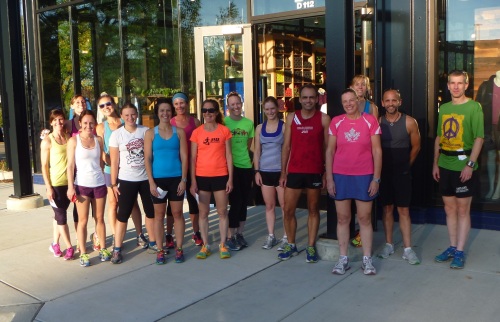 The attitude toward other runners is equally positive. Runners are incredibly supportive of each other, and are quick with encouragement, especially with newer runners. Training for your first 5K and feeling self-conscious telling that to marathoners? Don’t be. They were all in that place once. My first 5K was just five years ago. Amazing what you can do if you just keep showing up and running.

The ultra at Woodstock was just the most recent example. After the crowd on the trail cleared and my pace picked up, I began to pass other runners. Many of them were 100-milers who’d been out there 18 hours or more, and could easily be forgiven for being a bit cranky at having to move over. But what did I hear in return? “Good job,” “Go get ’em!” “Finish strong!” and the like. Not once did someone grumble or make a crack about bright-eyed, fresh-legged runners of lesser races.

Well, okay, I overheard one crack. But it wasn’t directed at me – it was a 100-mile veteran complaining how the 50K runners messed up the trail and aid stations while the longer runners kept them clean. She had a point – road marathons have large crews at the aid stations, and clearing a road of cups and such is relatively easy. Not so on the trail. So yeah, you short runners, don’t litter. But keep on running! We’re pulling for you. 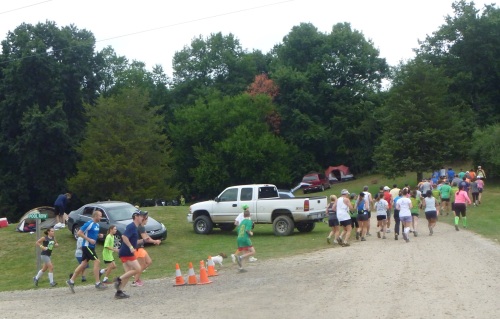 The Woodstock Sunday morning runners head for the woods. (I heard a few “Oh, my legs!” but no one stopped running.)