I hope you’re NOT sitting down when you read this.

In yet another wave in the media tide that says we’re f***ed no matter what we do comes the news that extended sitting is bad for your health. Not only that, it can apparently undo any good work you’ve done when you’re not sitting, such as walking, running, or engaging in other exercises that are supposed to keep you healthy. 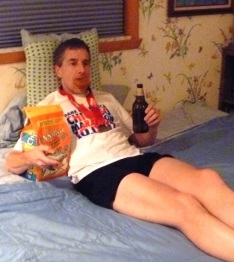 Fine, I give up. Screw the run, pass the donuts.

The eye-catching, sensationalist headlines trumpet stuff like, “Sitting is the New Smoking,” “Sitting will kill you, even if you exercise,” and “Sitting All Day Is Really, Really Bad For You.” And even that famous medical expert and Apple CEO Tim Cook was quoted recently as saying that, “[S]moking is the new cancer.” I could not find a comment from him as to why he leads a company making devices that encourage people to be seated for extended periods.

Anyone who knows me knows my interest in maintaining and improving my health and fitness, and how seriously I take my training. And yet, in order to afford my fitness activities and the rest of my life, I have a job – one that requires me to spend considerable time in my office reading, typing, or meeting with people. Which, most of the time, is done while seated. As is eating most meals, driving, watching TV, and writing blog posts like this one. 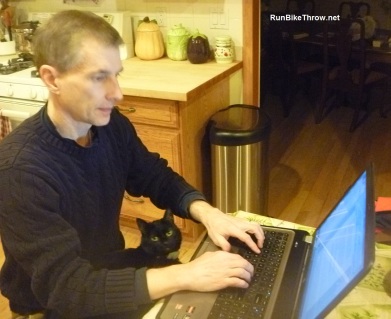 Yikes! What ever am I to do? 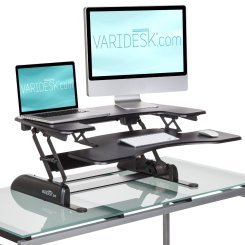 You can see this, and other examples, at Amazon.com.

Fortunately, brilliant minds have come up with solutions. Two recent innovations include the stand-up desk, and for those who want even more help exercising, the treadmill desk (although its benefits have come into question). These wonderful inventions come at a price, naturally, starting at around $300 and going up to whatever your fantasies and your wallet can stand.

The thought that while I’m sitting at my desk I’m undoing much of the good I do myself while exercising has been bugging me for some time now. So I decided to experiment with working at my desk while standing. But heck if I was going to drop $300 or more to get a desk unit to try out. Besides, once I’ve made a decision, I get impatient about carrying it out. So here was my solution. 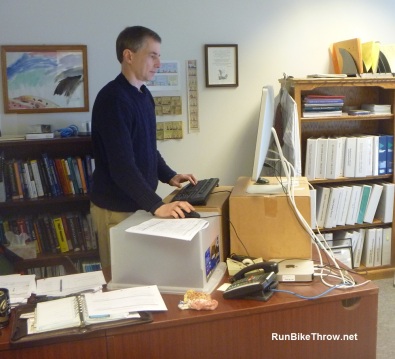 Who needs IKEA? I’m an engineer!

I spent most of this afternoon (about 4 hours) working like this. I even conducted a meeting with someone while standing up. (He was seated, but hey, it’s his body to wreck.)

The results were mixed. The first 3 hours or so were comfortable. After that my back got stiff and I took some “sit breaks.” Many of the stand-up units can be raised and lowered for just such occasions. A few more trials may be needed before I spring for one, though. I’ll keep you all posted (pun intended, of course).

Taking the opposite position, as it were, there is apparently a long-running debate in Germany about whether men should sit down when doing “Number 1” or if they should continue to relieve themselves standing up. There are even terms for the two sides: sitzpinklers (those who sit down) and stehpinklers (those who do it standing up). Being a sitzpinkler is seen as “non-masculine” by some men, while others see it as progressive and a way to help out toiler cleaners, who are mainly women.

The issue came to a head (*) recently when an apartment renter in Duesseldorf sued his landlord for this right (standing up for standing up?). The landlord claimed the renter’s urine had damaged the marble bathroom floor due to his, shall we say, poor aim, and had withheld part of the security deposit. The case was decided by a judge in favor of the renter. The moral of the story: He who installs marble flooring near a toilet is a dummkopf.

For my part, I remain strongly in favor of a man’s right to pee standing. If nature gives one the ability, one should use it, I say. Besides, what would we do with all the urinals? 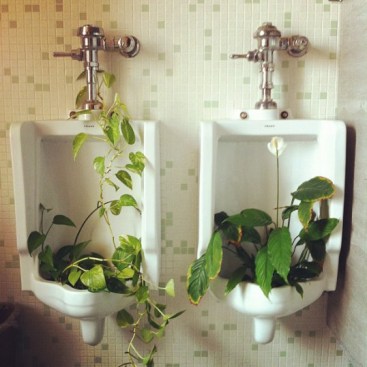 You know, the men’s room is SO much more aesthetically pleasing these days!

Check out some highly entertaining (and somewhat shocking) unusual real urinals at this site here. One more example below. 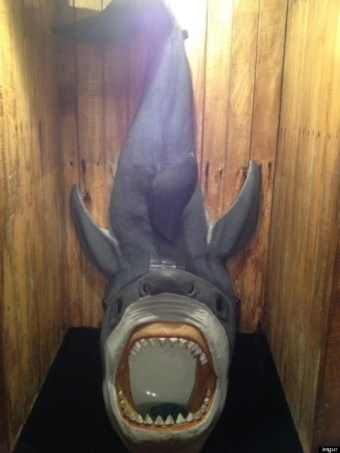 Go ahead, sitzpinkler! I dare you!

See you next time, if I survive all my sitting. You know, even in doctor’s offices and waiting rooms, what are we asked to do? Sit! Quick, have Tim Cook set them straight!

(*) Jeez, I’m full of puns today. Is it okay if I release them sitting down?