Day One – Gloves, Wallets, and Mushrooms

I decided to add an extra half day to my return trip for several reasons. While I’d made the trip up in three days, they had been long days, and I wanted some time to unpack and relax on Sunday. I also didn’t feel like tackling all the hills from the campground to Cadillac in one day. But mainly, I wanted more time to stop, look around, and talk to people. That was, after all, a major objective of this trip, not just to get there and back, but to enjoy the experience – to have an adventure, and see what was to see along the way.

Taking time: Chatting with some folks at Cravingz in Stockbridge about biking, camping, and quantum field fluctuations.

Mesick was a logical first stop. Just 44 miles away, I could start in the afternoon, and I’d get many tough hills out of the way without exhausting myself. The Mushroom Cap Motel had a room for only $50.00. We’d passed by it in the car for 20 years; now it was time to try it out. 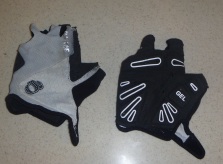 My wife blamed the elves.

The return did not start auspiciously. I got all packed, filled the water bottles, said goodbyes, put on my helmet and – hey, where were my bike gloves? A long ride puts continual pressure on my wrists and hands, and the gloves are specially designed to relieve that pressure and provide needed padding. A search of my bike bags and camper failed to turn them up. Either I’d done a great job misplacing them, or there’d been a quantum field disruption and my gloves had tunneled to another universe. Fortunately I’d packed a spare set, less padded and used only for short rides, but they’d get me to Cadillac where I could get another good pair at the bike store. I got on the road around 4:30, an hour behind schedule.

Just a couple hundred yards out of the campground, I passed what looked like a wallet lying on the side of the road. I retrieved it and confirmed it was a wallet, complete with ID, credit cards, and cash. Back to the campground office where I turned it in, and off I went again, my sense of perspective restored. Missing gloves were an annoyance; what could the wallet’s owner be thinking? And I couldn’t help wondering if I’d been meant to start late and find that wallet all along.

Typical terrain north of Cadillac. Whoever thinks Michigan is flat is cordially invited to join me next time. I’ll drive the support van with the oxygen.

I made a wrong turn and wound up on US31 during rush hour instead of back roads, but made it safely to Mesick before dark. I got to my room, took a quick shower, and got out my set of regular clothes to go to dinner. And as I unrolled my pants, out dropped my missing gloves. How they got in there I have no idea. I still haven’t dismissed the quantum field disruption theory.

Dinner was at the Mushroom Sports Bar just down the street from the motel. I had (what else) the Mushroom Burger. Pretty good, as was the ice cream at the Dairy Pit down the road. And the motel manager gave me some fresh ground coffee to top it off. They’ll get a good review on TripAdvisor from me!

Update: The wallet was returned to its owner. He’d put it on the roof of his car and driven off forgetting it was there. That was also the case when I found and returned someone’s cell phone during another bike ride a year ago.

This entry was posted in "500 at 50" Bike Trip, Running & Cycling and tagged bike tour, bike trips, Cycling. Bookmark the permalink.