Friday morning was overcast and cool, which was fine with me as I pushed off for a 110-mile trip south to Cadillac, then down the White Pines trail to Rockford, just north of Grand Rapids. The rain began as I entered Cadillac, and I tried out Da Dawg House for breakfast. This place is big on fun. There is some kind of meal called “dog chow,” and whenever someone orders it, the waitress puts on a dog hat and calls out, “Dog Chow!” and the customers all howl. The enormous cinnamon rolls looked to be too much even for me, but I gamely gave one a try. Unfortunately, it lacked flavor and was so dry I gave up after just a few bites. But the omelet was good.

I headed onto the trail in light but steady rain, which stayed pretty much that way the entire day. The rain gear I’d packed isn’t quite suited for cycling – the parka hood did not fit over the bike helmet, and I ditched the rain pants after they ripped while mounting the bike. My core stayed dry, though, which meant I stayed reasonably warm.

The paved portion of the White Pines trail ends just past LeRoy, but I was prepared. I got off the trail there and headed for Old Mackinaw Road – and found it all torn up and under construction. But no problem, the guy at the general store told me; just continue on the trail a bit longer, then take a short jog back to the paved road. What was that I said earlier about trusting locals with directions? At the pavement end I turned left and went up and down a slick and muddy dirt road, to have it dead end at another muddy road stretching out of sight.

At this time that my loving wife texted me, asking how I was doing. My reply – It’s raining, I’m on a dirt road in the middle of nowhere, and I’m pissed –  reflected that it was one of the low points of the entire trip. I turned around and slogged back through the mud, and found the paved road on the other side. Things improved from there, and hot coffee and pastries  in Reed City restored my soul. “Grandma Jean” (her chosen moniker) told me it’s a nice town,  but it suffers from the problems a lot of small towns share – overdependence on one large employer, and “big box” stores taking business away from the mom-and-pop shops. In Reed City’s case the employer is Yoplait, who was late to the Greek yogurt craze and has suffered a large sales drop, resulting in layoffs.

Back on the trail toward Big Rapids (paved again), I began encountering runners heading north. They were wearing numbered bibs, and I asked one if there was a race today. He said yes, it was a 200-mile relay race from Grand Rapids to Cadillac and back. I wanted to find out more, but didn’t want to disturb the runners, so I continued on, and at Big Rapids there was a relay station where I got more details and talked running for a while. 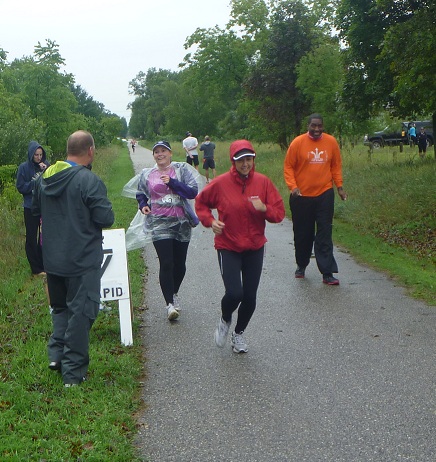 The next town was Stanwood, where I stopped for a quick bite and encountered “the stare” – everyone in the place looked up at me and stared as I entered. No doubt I was a sight, coming in wet and dripping from the rain and in bike gear. I’m sure it was just curiosity, but with no one smiling or offering welcome, it unsettled me. I had a quick bowl of chili and got back on the road, looking forward to getting to Sand Lake and dinner at the Lakeside Inn, which the reviews said had good food and was very friendly.

Getting there proved to be one of the hardest grinds I’ve ever done. The trail went back to sand and gravel after Big Rapids, and the parallel road lacked a shoulder and had traffic akin to the Indianapolis 500, with pickups and semis added. So most of the time I took the trail, choosing safety over comfort and speed. And all the time the rain continued down, getting me wetter, colder, and dispirited. For me, the final few miles of both long runs and long rides are very tough; there is a mental “wall” as tough to fight through as the physical one, and as I passed mile after mile on the barely passable trail, it began to feel like a Twilight Zone episode – the trail had no end, and I’d be following it forever.

Finally, Sand Lake! But the Lakeside Inn was another disappointment. The food was average, and the waitstaff seemed indifferent to my being there. It was busy, but I’d hoped for a little more warmth and consideration. Perhaps they’d had their fill of cyclists. But more worrying was how I felt afterward. A hot dinner had failed to warm me back up, and I was shivering as I got back on the bike.

I had no time to lose; it would be getting dark before long, I had about fifteen miles to Rockford, and there were no other options for stopping before then. I pulled my other jacket, thankfully dry, out of my panniers, and put it on under my wet outer jacket. After a couple of miles I warmed up and felt better. Lesson learned – pack another long sleeve underlayer, even in the summer. The trail became paved again, and taking full advantage, I got to Rockford around 8:30. Grandma’s House was a welcome sight.