The PR Fitness group run was smaller than usual today. Many of our regulars are running one of the big marathons this weekend – Detroit, Grand Rapids, or Columbus. I joined a group training for the “Iron Turkey” (5K followed by 10K) at the upcoming Ann Arbor Turkey Trot. We ran the Border-to-Border Trail along the Huron River, and I got to see the Argo Cascades for the first time. This is a set of artificial rapids completed last March that can be used by canoes, kayaks, and tubes. No one was on them today, it being cold and wet, but sometime I want to come back out to watch them in use. The crew teams were out on the river as usual, however.

This afternoon I stopped at the Running Fit in Novi to pick up what I won at the Ride for Amy auction – free race photos for 2013! Greg Sadler Photography donated the service to help raise money for Amy’s recovery, and I put in a bid on it, which turned out to be the winner. So all photos they take of me at races they cover (a lot around here) will be sent to me, full resolution, free of charge. It won’t take many races for make the price worthwhile, but even without that, the money went to a good cause. 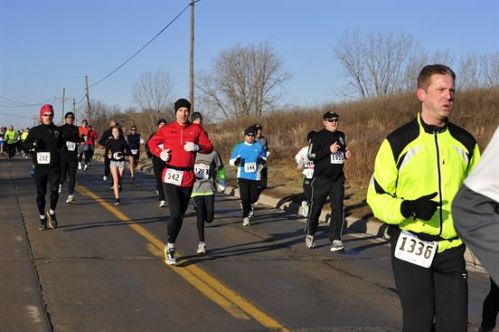 The 2012 Super 5K. Look for a lot more of photos like these in next year’s posts!

I also dropped off some old running shoes, including the ones I ran my Woodstock 50K in. I’d worn the soles almost completely bare from running and racing, and then for errands, walking around, and such. I’d used them for one final blaze of glory at Run Woodstock, since I didn’t care if they got trashed by the mud. Instead of throwing them in the trash, I decided to see if I could donate them instead. The girl at Running Fit confirmed they would take them, and that the shoes would be reconditioned for use in poorer countries where shoes are scarce. Despite the good cause, I found it surprisingly difficult to hand them over, sort of like sending two old racehorses to the glue factory. When I explained I’d run my first ultra in them, she smiled and asked if I’d like a moment alone with them.

I also have several T-shirts from my various races that I would like to donate to anyone interested. Adult Large, 100% cotton, most never worn. Holiday Hustle T-shirts are long sleeve. Email me or leave a comment if you’d like one. Otherwise, they will go to the Salvation Army store or PTO Thrift Shop.

This entry was posted in Running & Cycling and tagged race photos, races, Ride for Amy, Running. Bookmark the permalink.