The Perils of Paradise

LOOKS LIKE RAIN as I head out in the morning for a weekend bike ride, which reminds me of rain forests, which reminds me of my March trip to Costa Rica. It was for an audit, not a pleasure trip (ah, the burdens of work life), but I managed to get a couple of good runs in while I was there.

In Costa Rica, year-round you can roll out of bed at 6:30 a.m., toss on a shirt and shorts, and go running. The sun is already up and many people are already on the road, either heading to work or getting in morning exercise. Based on the number of other runners and cyclists I saw, I could have been back in Ann Arbor. (Except for the tropical plants and volcanoes. And the whole Spanish language thing.)

View from my hotel room. (Not that I had time to enjoy it. No. None at all.)

That said, there are a few caveats. The roads can be narrow and uneven in quality, and traffic laws are often interpreted as well-meaning annoyances. I was riding with a workmate one day and after stopping at a full red light, he proceeded to drive on through. “Why did you do that?” I asked. He replied that such things were okay on Sundays, which I might have accepted had it not been a Monday.

Running in Costa Rica requires you to keep one eye on what’s ahead of you, one eye on where your feet are landing, and one eye on what may be coming at you from any particular direction. As that is one eye more than most of us have, this presents something of a problem.

I think a few photos will illustrate the situation well. 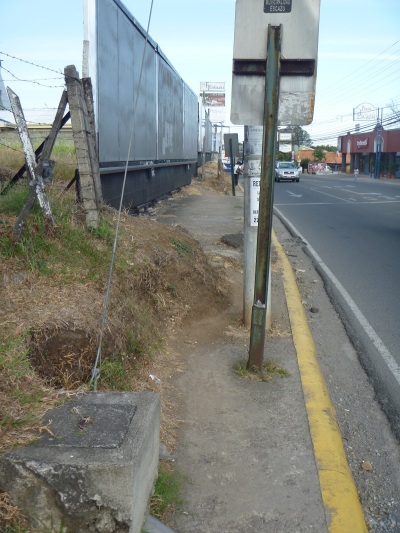 Better keep that head up and eyes ahead. 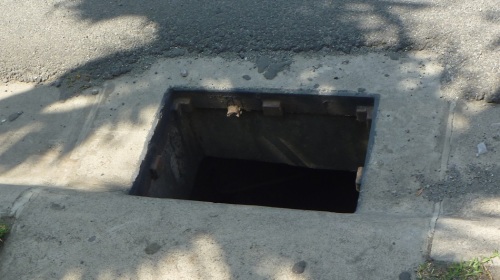 But better watch where you’re stepping!

Yet even keeping all this in mind, it is possible for “stuff to happen”. The final morning I was there, I got in a quick six-miler before heading to the office. For most of the run, all was well, and I almost managed not to get lost. But when in unfamiliar territory in Costa Rica, there is a rule for finding your way back: if you are heading uphill, go downhill, and vice versa. So I headed downhill and got back on track. I was el hombre! And then a school bus turned onto the street ahead of me.

As the road was narrow with no sidewalk, I jogged to the other side of the road to get out of the way. But as I was watching the bus, I took my eyes off the road. Sensing its opportunity, the curb leaped up and grabbed my foot, and I took a rather nasty spill. I jumped to my feet to show that I was (mostly) okay, but I’m sure the kids on the bus had a pretty good laugh.

But things turned out okay. When I got back to the hotel, scraped up and bleeding a bit, I found out that our ISO auditor is also a trained first responder. And no non-conformances in his report, either. Can’t ask for much better than that.

This entry was posted in Running & Cycling and tagged 50, Costa Rica, fitness, Running. Bookmark the permalink.

One response to “The Perils of Paradise”