Quick, what is this?

Hint: I took it during last week’s photography class. We were studying the effect of different aperture sizes.

I’ve taken lots of photos since I began this blog – races I’ve run, towns I’ve visited on my long bike trips, and Aikido classes at the dojo. I also take pictures when I try out a new recipe or make chocolate truffles. And I’ve used the same camera for everything, in part for simplicity and in part because I have no idea what I’d do with a fancier model. Like with my Garmin watch that I wrote about in my previous post, I haven’t explored half of my camera’s features. Now I’m finally diving deeper into what a camera can do, and why I’d want to do it.

I bought the Panasonic Lumix specifically for photographing my activities. I wanted something small and light so I could carry it during races, rugged enough that I could drop it without destroying it, and inexpensive enough that if I lost it, I wouldn’t lose much sleep over it. Oh, and I wanted decent photos, too. And that’s what I’ve been getting. But to get better pictures I need to start with myself, not by buying a better camera (yet).

It has its limitations. There isn’t a direct aperture control, so taking photos in dim light is challenging, and the flash isn’t the greatest – there tends to be a lot of glare. There is a good selection of “presets” for things like sunsets, candlelight, portraits, beaches, and even fireworks, but until now I haven’t had the inclination to try them out. The classes are changing that.

In my first class I learned about the basics of composing a photo, such as the four main elements (line, texture, color, pattern) and using different angles and focal points. Also things like how the eyes tend to move from left to right when looking at a photo, and how flipping, use of angle, filling the frame, and the “rule of thirds” affect how we see a photo. Here are a couple of examples.

In this shot from June’s Kona Run, our eyes lead us to focus on the guy on the right rather than the guy speaking. By flipping the photo (see below) the emphasis shifts to the speaker.

I prefer the first shot, as to me the expression of the guy on the right is priceless, and better captures the atmosphere of the photo. Click the photo to enlarge for better viewing.) 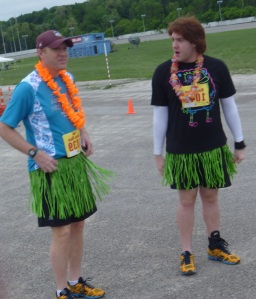 These next photos provide an example of “filling the frame”. The first shot gives the viewer context of the scene. Not bad, but not very “personal”.

This “filled frame” shot does a better job of capturing what I wanted – the sense that they are a couple and more of their personalities. It also makes their medals more prominent, which is appropriate for this special year (the 40th run). 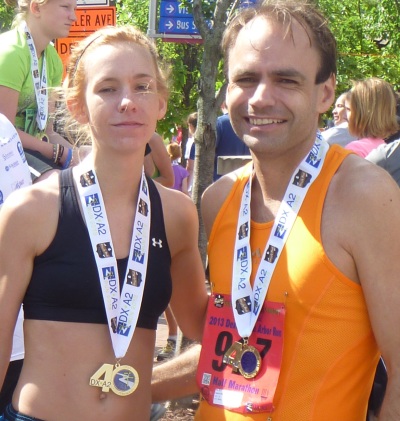 Finally, here’s a snapshot from a recent Aikido test. Pretty good, but you can see the trouble this camera usually has with the dojo lighting and the speed of the test. But now I can try adjusting the ISO settings, which should help with both light capture and motion capture.

In the second class we’re playing with the manual settings for special effects. That’s what led to the top photo. To get the effect of colors suspended in space, I used the “fireworks” preset and then manually raised the contrast. Here’s the same shot using more realistic settings.

Many of you fellow bloggers take great photos. What cameras do you use? And have you ever taken your camera with you on a race?