Back to the Marathon!

WELL, THE BUG FINALLY BIT ME.

The Boston Marathon bug, that is.

Now wait a minute, I hear you say. Isn’t the Boston Marathon the ultimate goal of every runner? How can you not have run it by now?

Yes, it may be hard to believe, but up until now I had no desire to run Boston. There are plenty of other races that I enjoy very much, and many more that I am considering doing some day. Besides, I’m much more of a trail guy. I’ve now run 12 ultras (50K or longer) with more to come, but only two marathons to date.

Now, running Boston is very popular in the PR Fitness running group. Every year 25 or more of us end up going. This included 2013, the year of the bombing. Fortunately, no one in our group was among those killed or injured. Nor did it scare any of them away from running it again. I proudly participated in a large “Boston Unity Run” in our area later that year (see this post) but still didn’t feel the desire to join the big dance.

So what changed my mind? I’m not really sure, but a couple of things helped.

In December 2016 I turn 55 and join a new age group, and I thought it would be a fun birthday present to myself to run Boston in 2017. And I also think it would be fun to be part of the whole experience – the tradition, the history, the crowds, to tackle Heartbreak Hill and cross that finish line. And I’d get to wear that cool Boston Marathon Finisher jacket. 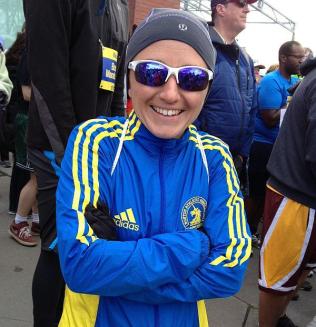 And exactly the right colors, too!

So, for one more time at least, I will be stepping off the trail for a bit, and running one of those short races – the road marathon.

Actually, make that at least two marathons. To get into Boston, you need a qualifying time based on your age group, in a marathon that has been certified as a Boston qualifier. The Martian Invasion of Races in Dearborn next April will be where I attempt to qualify. I’ve signed up, and my training has already started.

What are my chances? Hard to say at present; my Chicago time (first marathon) was 4:12. My second (Ann Arbor 2012) was 3:55, but I ran that one casually and took photos. But based on my half marathon time, I should be able to run a 3:30 or better. I guess I’ll find out. It’s going to be an interesting winter!

6 responses to “Back to the Marathon!”