I sat at the Glacier Ridge Trail Ultra 50 pre-race dinner in a mixed mood.

“The trails are in great shape,” the race director told us. “And it will be much cooler than last year. There is some rain possible in the morning, though.”

The forecast was for temperatures in the 50s all day long – perfect for a trail ultra, and much more civilized than the 90+ degree heat that had broiled us in 2015. It meant I could worry less about staying hydrated, or having to keep ice bags under my cap.

And yet I couldn’t help feeling a bit disappointed. I’d dropped at mile 40 last year, and having tackled the cause (poor electrolyte management) I felt ready for anything this year. So with mild weather and good footing promised, the thought nagged at me that this year’s race wouldn’t pose as much of a challenge.

Boy, was I wrong. 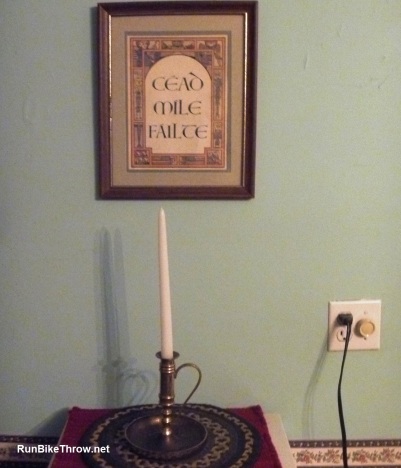 This was on the wall of my bedroom at the B&B. Fortunately it means, “A hundred thousand welcomes” and not “50 mile failure.”

Before I hit the messy details, I’d like to say any serious trail lover should give Glacier Ridge a try. The events (30K, 50K, 50 mile) wind through various parts of Moraine State Park in Portersville, PA, with beautiful and well maintained trails. I’d call the course moderate at 7300 feet of elevation gain, with most of the ups and downs in the first ten miles and last ten miles. There are no river crossings like Dances with Dirt, or rope climbs like Voyageur, but challenges abound. And with fewer than 300 runners for all events, it has a homey feel and doesn’t destroy the trails if you’re in the back of the pack.

The first mile is on a bike path, then switches to singletrack until mile 21, where you begin the Swamp Run segment on gravel roads and dirt fire roads. This part is very runnable. At mile 30 you endure a brutal climb up to a pipe holding a telephone book, tear out a page, and head back the same way to mile 40. The final ten miles are the first ten miles in reverse, so you cover the toughest terrain twice. 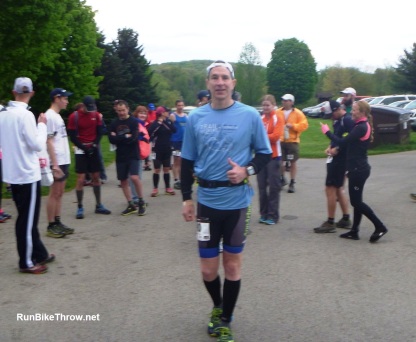 At the starting line, ready and determined to finish this one!

The race started at 6:30 a.m. I took the first section easy, resisting the urge to run the inclines even as people passed me. After all, I was practicing for Kettle Moraine, where I’d have to apply the same discipline. And I figured I’d catch many people later on (and did).

The rain started just before I arrived at the Route 528 aid station at mile 10. I had a rain shell in my drop bag, so after pulling that out I was on my way through the Jennings nature area. The trails flatten out a bit in this section and there wasn’t much mud at this point, so I cruised along enjoying the cooler temperatures.

Back at Route 528 at mile 21, I caught up with a young guy named C.J. who was running his first 50-miler. His rookie-ness was evidenced by two things; he’d started out relatively fast, and he had no water bottle, which would have meant certain death last year (*) and was risky even in cool wet weather.

C.J. hits the singletrack. I figured I’d see him later (and did).

I had an extra bottle in my drop bag, so I loaned it to him. This earned me some effusive (and rather embarrassing) praise from the aid station captain, but to me it was no big deal; this is what trail runners do. Last year three runners walked three miles with me to the aid station when I melted down at mile 37, giving up better finish times to help a struggling runner they didn’t know. Loaning a water bottle was at least a down payment on karma payback. 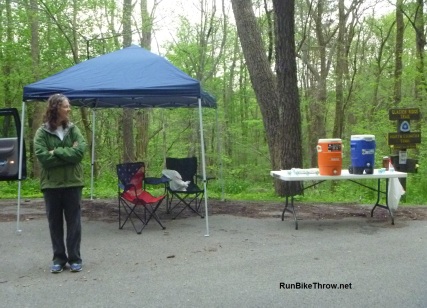 There were several friendly water stops, but not enough that I’d try to run without a bottle.

Swamp Run gave runners a different challenge this year. Instead of broiling heat, it presented an increasingly muddy and slippery trail, helped out by more rain. But with no nausea, and abandoning any attempts at avoiding the mud, I was back at the Route 528 station at mile 40 just past the 8-hour mark. I felt good and figured I had a shot at a 10:30 finish, maybe even 10:15.

Two things became immediately evident as I headed up the first big hill of the final segment. First, I wasn’t going to finish anywhere near 10:15. There was no longer any solid footing on the trail, and the downhills were equally or more treacherous than the climbs. One slip could spell disaster. I was able to practice my mud-boarding skills a bit (**), but even that was too risky given the rocks and roots sticking up out of the mud. So it became a routine of slog my way up and care-ful-ly pick my way down.

Second, I realized there was no way I could have finished in 2015 given how I’d felt back then. At best I would have crawled my way back to the aid station after a few hundred yards. It made me feel better that I’d made the right decision back then.

Around mile 48 I began to hear the traffic noise that signaled I was near the end. In past ultras I’ve struggled with impatience at these points, getting angry at a trail that never seems to end. So I applied the technique I used at last year’s Run Woodstock 100K. I let go the thoughts of where I was, and focused only on the path in front of me.

With my mind calm, I was able to relax and enjoy the final miles. Soon enough came the final road crossing and final descent, and there was the bike path. That last mile also seemed to go on forever, but I was too happy to care.

Those final ten miles took three hours, but I crossed the finish line in 11:08:09, easily beating my goal of 12 hours. And I had energy left over, just what I was hoping for. Overall it was a great dress rehearsal for the Kettle Moraine 100, and the DNF monkey was off my back! 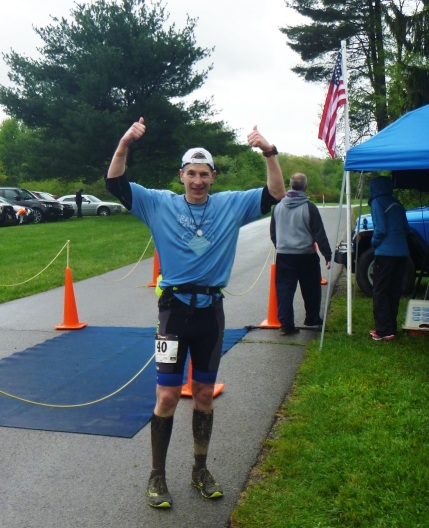 As for C.J.? Unfortunately, he did not finish. Neither did Dan, whom I sat next to at the fireplace after the race. At age 69 he is still running trail ultras. “I ran my first ultra in 1977,” he told me. In 1977 I was in high school and while as a caddie I walked long distances, would never have believed I’d be a trail runner someday.

(*) Okay, I’m being a bit melodramatic. But I can guarantee anyone who ran short of water last year felt like death. Ask me how I know.

(**) Mud-boarding is where you pretend you are on a snowboard and the mud is powder. It worked perhaps too well out there.

2 responses to “Bring on the Mud! Glacier Ridge Trail 50 Recap”