So Skip gave me a set that I finished right at 12:45. “You should just tell us ahead of time,” he said after I’d changed. “We can get you in earlier that way.”

I’d just assumed I’d have a short session instead. But he was right; with advance notice I’d have been able to get in my full session. Besides, it was common courtesy.

The next day after my workout, my wife called. “Did you tell Skip I needed to talk to him at my session today?” she asked. “Yes,” I said, “but Skip left early today. So you’ll have to wait until next time.”

“I wish you’d told me,” she said. She’d been caught in traffic and wouldn’t make her session on time, and was worried she’d lose her opportunity to consult with Skip. He wasn’t there anyway, but she hadn’t known.

Well, what goes around comes around. This afternoon I was setting up for Run Woodstock and noticed the recycling rolloffs I’d ordered hadn’t arrived. So I called the disposal company to check where they were. “The delivery was changed to Friday morning,” I was told.

It wasn’t the fault of the rep I’d worked with; he’d put “delivery Thursday” in the work order. The operations manager had changed the delivery day and time, probably to accommodate his other delivery commitments.

“I need to know these things,” I said, and confirmed they had my contact information on file. The rep agreed I should have been called.

What do you suppose is going on? It’s easier than ever to reach out and touch someone (any of my readers old enough to remember that slogan?). Today I called a co-worker in Costa Rica and five minutes later we were working through a shared document on our screens, each of us taking control when needed. Thousands of miles distance and two hours time difference? No big deal – standard practice.

And communication is increasing rapidly worldwide. Yet while use of social media and email are growing, mobile voice usage (i.e. phone calls) has been dropping since 2013. I’m as guilty as anyone else of this. As an introvert I’m more comfortable with exchanging emails, where I can take my time and compose messages carefully. Personal interactions like face-to-face meetings and phone calls are mentally draining.

But nonverbal communication is by no means foolproof. There are times I’ve sent a business email and heard about it later because it was misinterpreted. “That should’ve been a phone call,” my boss will say. “Your tone of voice and manner of delivery would have made your meaning clear.” In part because of this I’m more tolerant of emails I receive that seem less than polite. 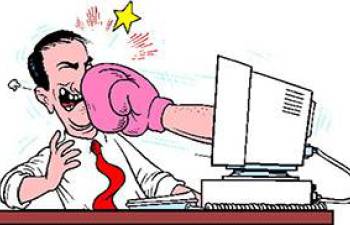 (Check out this article: 14 words and phrases you should not use in emails.)

I’m sure there’s some heavy duty, government-funded research going on that will reveal the enormous social damage being caused by Twitter and Snapchat, and how uncontrolled flame wars between spouses are spiking divorce rates. While I may not be able to preserve the American family all by myself, at least I can be better about calling people when needed.

And yet…as my wife and I drove home from a weekend up north, her phone rang. It was our daughter in Richmond and her wife. As much as we enjoy hearing from them, being a parent there’s always that little concern about an unexpected call from a faraway kid. But no worries this time. “I just called to say hey,” she said.

So there’s hope for the world after all.