MY 2011 RUNNING YEAR BEGAN with a quick four-miler on New Year’s Day. As with every run, the most important part was the first step out of my driveway. This morning outside the downtown lululemon store came the final step of the final run of the year.

My 9.3 mile run this morning gave me 1010.10 miles for the year. (I suppose 1111.11 would have been more appropriate, but I didn’t feel like running another 100 miles today.) And I achieved my final running goal of 1,000 total miles for the year! The 106 miles I needed in December seemed like a real challenge, but I got through them smoothly, although it included running just about every day, which I wasn’t accustomed to. I’m not Woody Allen’s biggest fan, but I have come to agree with him that 90 percent of success is just showing up. 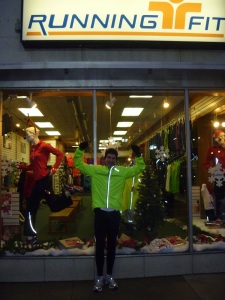 I reached 1,000 miles with a point-to-point run on Thursday from my house to the Running Fit store downtown, where I run from on Wednesday nights. Along the way I passed the lululemon store where I run from on Saturday mornings and the PR Fitness studio owned by my coach. It was a pleasant, uneventful run until I reached Liberty Street, when another runner appeared going at a much faster pace, and he was soon a couple hundred yards ahead. No big deal; this was a solo run, not a race. And then someone shouted from somewhere, “Catch him! Go!”

At first I laughed it off, but then I thought, only a half mile to go, feeling good, why the hell not? I hit the gas for a quarter-mile surge, which was enough to catch up and pass him just before I turned up Fifth Avenue for the final leg to the store. I have to admit that was fun! 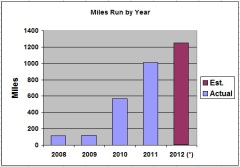 It's amazing what can happen if you just go out and run.

I’ve set some running goals for 2012, including a total distance at least equal to this year’s, some half marathons, at least one full marathon, and an ultramarathon in addition to my regular 5K and trail runs. But just like 2011, the most important step will be that first one out of my driveway on January 1.

Happy New Year to all my readers! What are your goals, fitness or otherwise? Let me know, and if you’d like to make a public commitment, I’ll be happy to post it here. Please also send me stories you think we’d enjoy. My first guest post will be up very shortly, from a longtime friend who helped inspire me to begin running regularly. Looking forward to posting hers and many more!

One response to “A Single Step”