Saturday morning at Grandma’s House (*), warm and dry again, I had breakfast with “Grandma” (real name Chichi) and chatted with her and her husband Larry, and Madison, one of her great-granddaughters, who was staying with her for the weekend. I found out they had lived in the California desert at one time, but came back to Rockford because they missed it, and much of their family (seven children, 19 grandchildren, and 7 great-grandchildren) live in the area.

Rockford is another community in transformation. Like Reed City, it depended on a major employer (Wolverine Worldwide, the makers of Hush Puppies and other footwear) but suffered when most of the jobs were outsourced. Today it’s a bedroom community for Grand Rapids and according to Grandma, a lot of politicians live there. But it still has the small town values. She works as a greeter at the local Meijer, and they’ve been trying patiently to convince their store manager (a transfer from Detroit) that no one there steals things or wants to take advantage of him.

While Grandma’s breakfast – yogurt, French toast, sausage) was fine, she likes her coffee weak, so I was hoping to find some good stuff in Belding, my first stop. The Morning Glory Bakery met my needs there, and had good doughnuts, too. Jan (pictured here) said her daughter started the bakery after making her own wedding cake and deciding she could do that for a living. Jan had been a teacher, starting at a one-room schoolhouse in Nebraska, then teaching special education in Ionia for 20 years. She’s a strong believer in education at any age; she’d gone back to get a literature degree at 50. “I think older students appreciate the education more,” she said, “and it keeps you socially engaged.”

Jan had gone to college in Chicago, “so I wouldn’t end up marrying the guy down the road and become a farm wife.” There she met her husband, a medical student, and he set up his practice in Belding. “He had a practice here for 53 years,” she said. “He made house calls, delivered over 200 children, and if someone couldn’t pay him, that was okay.” Are there any doctors like that left anywhere today?

In Ionia I had another of those moments I’ve had during my bike trips this year, where I think about something and it appears in front of me. The 25-cent lemonade stand in May was one example, as was when I thought about getting Mother’s Day cards and looked up right at a Hallmark store. This time I was worrying about needed repairs. Among Friday’s series of unfortunate events was the failure of the speedometer and odometer, and the shifting had become balky, making hills more challenging. As far as I knew, Skidmore’s in Charlotte was the only bike shop for miles around. But I’d have to push hard to make it there before it closed. But as I enter downtown Ionia and coast to a stop to look for a place to have lunch, what do I see directly in front of me: 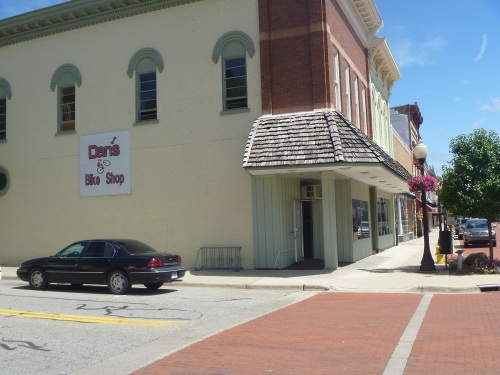 I left the bike in Dan’s hands while I went to lunch, where I indulged in deep-fried mozzarella sticks for the first time in years (they still taste the same). When I returned, not only had he fixed the computer and shifter (a cable needed replacement), he pointed out an attachment bolt on my pannier rack that had nearly come out. With a full load in those panniers, losing that bolt would have been bad news. For the entire rest of the trip, the bike shifted beautifully and I had no further problems.

In Portland I happened to stop in front of an antiques store. Now while these are practically required in small towns – I cannot remember a town I visited that didn’t have at least one – I hadn’t gone into any of them. But the window display looked intriguing, so I yielded to curiosity and went in. Tom, the owner, lives in St. Johns but has his shop in Portland because it gets more traffic. “Nobody stops in St. Johns,” he said, and I couldn’t disagree; we’ve driven through it on US-127 for over 20 years and have never stopped there. (**) And while poking around, I found something I could actually still get into my bike bags, a war diary of Guadalcanal. With the coffee shop having just closed (the nerve!) it was on to the final stop of the day.

And Google said, “Take this road for 6 miles.”

I started out on the Charlotte Highway, but my map directed me onto a dirt road. I wanted to avoid the main road, but I had a bad feeling about it. And after two miles of hilly dirt roads, I come to this (see right):

So after some wailing and gnashing of  teeth, followed by yet another vow to never EVER get on a dirt road again, it was back to the main road, which put me onto M-50 into Charlotte. Fortunately, traffic was light and I got to the hotel ahead of schedule.

My daughter Rachel drove in from Kalamazoo to meet me, and we went downtown for dinner. The Eaton Place (get it?) was just about to close, but the Eaton Pub next door fit the bill, and both were recommended by the hotel. I recommend it too. It has excellent French onion soup and good pizza.

(*) This B&B is an incredible value, and a chance to talk to some very nice people. Anyone cycling in the area should consider staying there. But be sure to call in advance, as they often cannot accommodate drop-ins.

(**) Except once at that ultimate tourist trap, Uncle John’s Cider Mill. It’s very popular, but I wasn’t all that impressed.

This entry was posted in "500 at 50" Bike Trip, Running & Cycling and tagged bike tour, bike trips, Cycling. Bookmark the permalink.