What I Learned from a Vacuum Cleaner

Today I visited the Genyokan Dojo for a noon stretching class. I was the first student to arrive, so after changing into my dogi I got out one of the vacuum cleaners and began to clean the mat. No one told me to do this; I had learned it from earlier classes, watching other students prepare the dojo for its first class of the day. I expect that most students learn it the same way.

Pushing a vacuum back and forth on a large mat is not the most stimulating of jobs, and I began to get annoyed. I’d arrived early so I could work on some techniques before class began, and all my practice time was being sucked up, so to speak. Then I remembered that preparing the dojo is also part of training. A clean, tidy dojo supports the positive spirit needed to perform at one’s best. Cleaning and other menial tasks are also good for suppressing the ego – it’s hard to put on airs or feel overly self-proud when you are on your knees scrubbing bloodstains out of the mat.

In The Karate Kid (1984 version), the master begins the boy’s training by making him wax his car and do other tasks. Back in Japan, this kind of start was the norm. Sensei once told a story in class about novices who wanted to study under a great master. Being accepted did not mean you started practicing techniques that day. The novice was expected to spend a long time just working at the dojo, cleaning, repairing, fetching whatever the master or other students needed, etc. It could take two years or even more before he was invited to step onto the mat to begin actual training. But all this time the novice had been watching the students practice, and his duties had trained his body in certain movements, so even though he had not formally practiced, his form was already good and his progress was rapid. 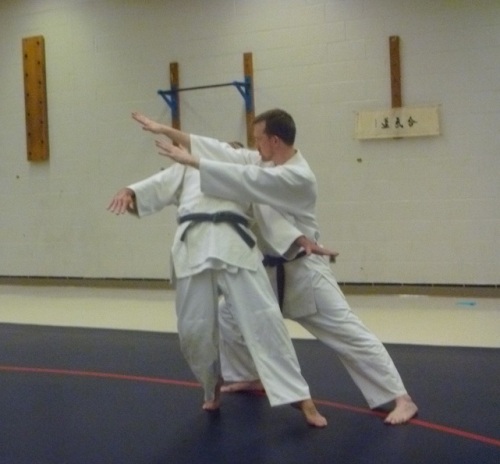 You get good at this one through continually supporting extension ladders.

In the U.S., Sensei then explained, the approach had to be different. Americans have jobs and families and do not expect to live at the dojo and train full time every day. So new Aikido Yoshokai students begin learning techniques right away, while also studying the basic movements and exercises needed to perform them correctly. This approach allows people like me to learn about and train in Aikido, for which I am very grateful. And if I have to take a few minutes getting the dojo ready, or putting things away at the end of class, it’s well worth it.

As it turned out, after some stretching and light conditioning exercises, Sensei gave us time to work on our upcoming test techniques, so I got the practice in after all. Where’s the Minwax? I think the wood panels need cleaning…

This entry was posted in Aikido and tagged Aikido, learning, training, Yoshokai. Bookmark the permalink.