ASK ME TO DESCRIBE MY OUTLOOK ON LIFE IN ONE WORD, and I would answer, “Improvement”. New and/or better stuff is fascinating to me, and helping improve things is what I do for a living. Improving myself is certainly part of that. Something didn’t go well? Sure, I get bummed out. But next time will be better.

With that spirit in mind, I had a chat with coach Marie about my performance at the Dexter-Ann Arbor half marathon on June 2. My time of 1:35:48 was over a minute faster than last year’s time, but it was two minutes slower than April’s Martian half marathon time, which I’d hoped to beat. In particular I was worried about my falloff of energy in the second half of the race, making the final few miles a real struggle that included stopping at the water stations to catch my breath.

We began with a review of the things I did well. My form is good, I’d put in the mileage needed, and my other races this year have been great. But things hadn’t gone according to plan. So was I just not up to the plan for this race, or was the plan itself not the best? We went over everything to find out. Here’s what I learned.

1. Get More Sleep, Get up Earlier 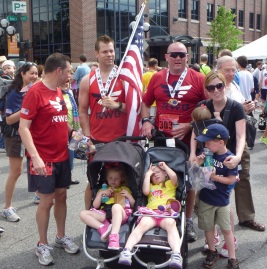 Kudos to Team RWB, who raise money to support veterans returning from combat. (But it looks like someone else needed more sleep, too.)

I’d actually planned to go bed around 10 p.m. the night before. But for various reasons I don’t remember now (in other words: avoidable) I didn’t actually get to bed until after 11, and as always before a race, it took a while to wind down enough to sleep. Then I didn’t get out of bed until after 7 a.m. for an 8:30 race. This isn’t necessarily bad, unless it interferes with getting a good breakfast (see below). But why risk it? At Martian I was up at 6:00 so I had enough time to drive to Dearborn. I could have done it here, too.

It’s not easy for me to eat breakfast until I’ve been awake awhile, and even then I’m not usually hungry. So I often hold off. Not good on race day. By getting up only 90 minutes before the race, I shortened my breakfast window, which I reduced further by deciding to do my warmup run before I ate breakfast. And after all that, I had only a Cliff Bar. By contrast, I was up over two hours before Martian, and had more to eat beforehand. Small wonder I had more sustained energy for that race.

Run’s over – back to the important stuff.

I compounded the problem by not fueling enough during the run. The standard rule for race fueling is, “45 and 15” – consume something 45 minutes in, and every 15 minutes after that. This is adjustable to each particular runner, of course, but the basic idea is to keep blood sugar up. This meant I should have fueled with a Gu at about the halfway mark (which I did), then every two miles after that (which I didn’t). Combined with so little to eat before the start, plus a very ambitious pace (see below), a late-race crash was pretty inevitable. 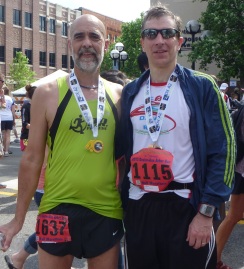 Michael (left) has just come off an injury and was happy to finish. There’s another lesson learned.

Based on my Martian pace (7:09 average), and that for the past two years I’ve run faster at Dexter-Ann Arbor than at Martian, it seemed reasonable for me to try for a faster cruising pace (around 7:00) and another personal record (PR). This may have been expecting too much. Perhaps with more rest and better fueling I would have done better, but unless things went absolutely perfectly, I was setting myself up for disappointment. It may have been better to start with the Martian plan, then run harder at the end if I had the energy.

So there we have it – three areas to improve on for next time, which looks like the Crim 10 mile race in August. It’s close enough to a half marathon that the strategy will be basically the same. You can be sure I will improve my preparation. We’ll see how it translates into performance.

If I improve enough, maybe someday *I* can be up there next to the aardvark!

2 responses to “Improving by “Halves”: Lessons Learned from Dexter-Ann Arbor 2013”