Wow, what a week. Seven days, four running events. I’m going to recap today’s events here and save the other two for a bit later – just cuz I wanna.

The day kicked off with the Flirt with Dirt 5K, a trail run in Lakeshore Park in Novi. Regular readers know how much I love me a trail run, but this was actually my first-ever 5K on a trail. My strategy was basically the same as for any 5K – run like hell – and after all the half marathons and 50K races this year, I was looking forward to letting it all hang out from start to finish. (So to speak – this was not a natural run.)

I lined up at the front, literally “toeing the line” and got into the front group right from the start. The course had been advertised as “an ungroomed bike trail” but it was in terrific shape. There were sharp turns but it was wide enough to run comfortably, with fewer roots and stones than my other trail runs. So I kept up my pace, and to my surprise, nobody passed me, or even seriously challenged me. I charged up the final hill and over the finish line in 4th place overall – my third top 10 finish (all on trail runs) and best finish ever in a race.

I just had time to get my award and take a few quick photos, and then it was down the road to Northville and the Kona Run.

I’m a regular pacer for the Kona series of races, and thought it would be a good challenge to run the trail 5K and then pace the Kona 5K. I’d cleared it beforehand with Larry, the organizer. But when I got to the starting line, the pacer bibs and signs were nowhere to be found. Turned out Larry had relocated to the finish area, and there wasn’t time to go find him. 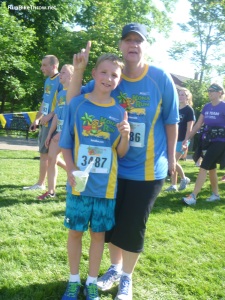 So, Plan B; I became an unofficial photographer and “race cheerleader”, and took photos of people who were running their first-ever 5K, along with high fives and encouragement. Then I ran in the second wave, with no bib, and took more photos. In running, this is known as being a “bandit.”

Bandits are generally harmless, unless they’re deliberately cheating in a competitive race – for example, by wearing someone else’s bib and essentially impersonating that person. But many in the running community consider banditing uncool, the attitude being that if you’re going to run an official event, you should pay for it.

But some bandits have more noble motives. Perhaps the most famous bandit is Kathrine Switzer, who ran the 1967 Boston Marathon when women weren’t allowed to participate. Actually, she did register (as “K.V. Switzer”) and ran with a bib, although it was nearly torn off by Jock Semple, the race manager, when he saw her on the course. Read Kathrine’s account of the event at this link – it’s a good read.

In my case, Larry had no problem with what I did. He even gave me one of the pacer shirts at the finish line. But next time I’ll get specifics on where he’ll be.

3. Like Fish, The Best Photo is the One That Got Away

But perhaps the most memorable event of the day took place at the cafe where I was enjoying a post-race latte and scone. I happened to be sitting outside near the road, and a car pulled up next to me and stopped. And the driver starting speaking to me in French!

“You’re outside at a French cafe,” he said. “You should be speaking French!”

Turns out he was a D-Day veteran, and seventy years ago this weekend he was in Normandy. I wish I’d gotten his photo, but there wasn’t time – he was blocking traffic. So I settled for thanking him for his service, and exchanging a few phrases in French.

Next up: a recap of the week’s other events, and looking ahead to the Liberty Festival in Canton and the Uncle Sam Slam.

2 thoughts on “Smoking, and the Bandit”