Great Event, But Where’s All the Trash?

Last Sunday was another “first” in my adventures in running – an early morning two-hour drive to Grand Rapids and the Gazelle Girl Half Marathon & 5K.

So, one might wonder why a manly man like me would be part of a female-only race. Well, I was not there to take part in the race, but to pick up after it. Yes, I was on the waste collection and sorting team. A minor version of Mike Rowe doing a Dirty Job. (Being called the “Green Team” didn’t mean we got to keep our hands clean.)

What kind of stuff gets tossed out at a race? Some of just about everything. But the main categories are food waste, cups, water bottles, and Gu / energy bar wrappers. Any large event generates a lot of all of that, and the Gazelle Girl had over 3,500 runners, plus spectators.

What made the job intriguing was that last year, a grand total of one 6 lb. bag was sent to the landfill. Yep, one 6 lb. bag. Everything else was either recycled, sent to a composting service (Organicycle), or (as with the Gu wrappers) sent to Terracycle, a company that turns the scrap into other products like children’s furniture. 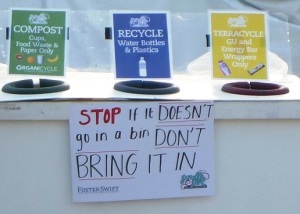 How did this happen? Good planning and lots of information. One way of limiting waste, for example, is to tell people not to bring something that’s going to end up as landfill trash. Another way is to mark very clearly what goes where, and to staff the stations, which I did briefly before moving to the lovely sorting brigade.

So how much waste actually went to the landfill this year? See below. Enough of describing what happened – I will let the pictures tell the rest of the story. Enjoy! And many thanks to Chelsea and the other Green Team members for helping me learn how sustainable a race can be!

No one’s going to steal this waste on my watch! 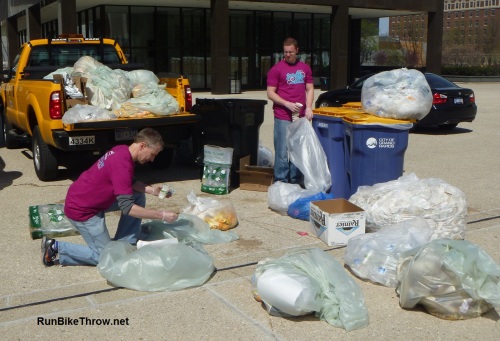 I was so good at manning the station that they moved me to sorting.

A sample compost bag. Most of the cups and lids were compostable, but we had to sort out the others for recycling. 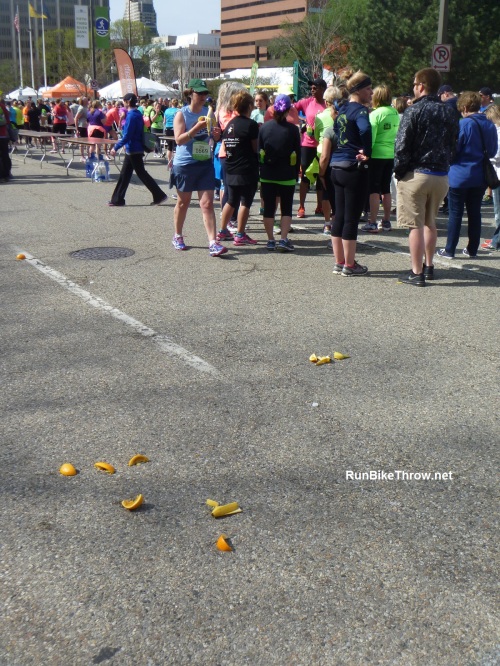 Even with bins all around, there was still food waste scattered everywhere. Sigh. Grow up, people. 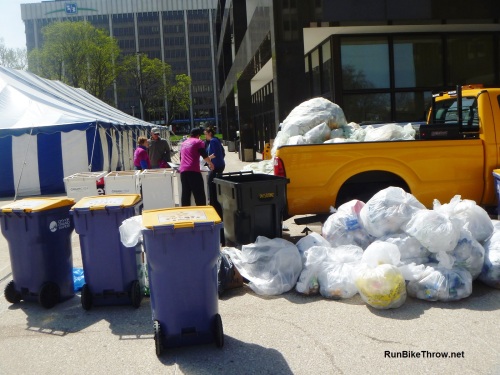 The final tally from the start/finish area. The truck has the compost and Terracycle bags. The bins and bags are for recycling. Aid station bags were left on-site and picked up on Monday.

And here’s what went to the landfill. Yep, that’s all.

One response to “Great Event, But Where’s All the Trash?”