How many running events are you aware of that have a) whiskey, b) hugs from random strangers, c) a course that takes you through a dance party, or d) shameless nudity? And the only “entry fee” is a gallon of water and a few snacks for the aid stations?

Well, as far as I know, the Black Rock City Ultramarathon is the only race that offers all of the above.

The race is hosted by the Pink Lightning camp, which provides bibs, timing chips, medals, T-shirts, and refreshments – all for no charge to the runners (excepting the crazy expensive Burning Man ticket, of course). About 250 people sign up each year. 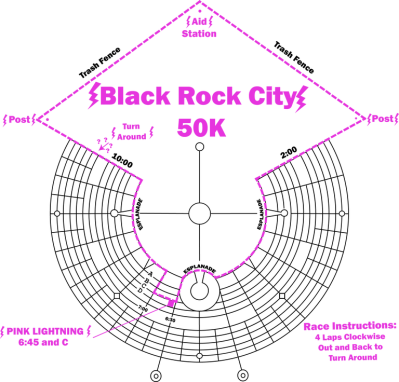 Since it’s impossible to describe everything I saw, heard, and experienced running the BRC 50K, here are a set of vignettes that hopefully give you a sense of it.

Sorry about lack of photos; my phone was nearly dead and my solar charger didn’t work. Besides, at Burning Man you are encouraged to, “be a participant, not a tourist,” and taking photos takes you out of the moment. However, at the end of this post I’ve provided some links to photos and videos others have taken.

Tuesday August 28, 4:30 a.m.: Crawl out of warm sleeping bag, put on clothes and gear meticulously laid out the night before. Ready to go – except I can’t find my headlamp. I rummage through my clothes bag, gear bag, and everywhere in my tent before I find it around my neck, tucked under my shirt. Slap head and bike to Pink Lightning as fast as I dare. They start late, thank goodness, because I don’t know BRC well enough to understand the course map. I follow the crowd until I get oriented.

Starting in the dark means we see an amazing sunrise, with the sky turning from red and yellow brush strokes into bright blue. And the temps stayed cool until late in the morning, which helped explain some very fast finish times (the first five runners were under 3:35).

Loop one: Pain in my left big toe, like something sharp is pressing on it. It gets worse, so at the aid station I find a chair and peel off my shoe and sock. I don’t find anything, so I remove the tape on the toe – and the nail comes off with it.

No big surprise, as I’d damaged it at an earlier race. I cover the bare area with a Band-Aid, retape, put sock and shoe back on, and I’m good to go. A volunteer shakes his head. “Hard core,” he says admiringly.

Not really – just standard ultra fare. And now I’m running pain free. Never been so happy to lose a toenail.

Loop two: I catch up to a guy wearing some really unusual shoes. Under the soles are metal bands acting as springs. Along with the bouncing stride, they add about four inches to his height. He tells me they’re “rebound shoes” with the springs providing a large energy return, and that he likes them a lot. He’s not sure if they’re “race legal,” but hell, this is Burning Man, so who cares?

Here’s a link to the website if you’re interested in finding out more. They also make a brief appearance in the video below.

Loop 3, approaching the Esplanade: a woman waves a bottle at us. “Whiskey! You know you want it!”

Runner ahead of me: “No thanks.”

Note: a bad attitude at Burning Man is almost always “snark” and not to be taken seriously.

I’m offered the same (and also decline) and starting loop 4, a young lady holds out a 2-liter bottle of a mysterious red liquid. “Please say yes!” she pleads.

Time for some snark of my own, I decided. “Yes!” I responded – and ran on right past her.

Loops 2-4, returning to Pink Lightning: there’s a dance party in full swing on the Esplanade. No problem, we run right though it, getting hugs and high fives. On one loop as we get near, “YMCA” comes over the loudspeakers. Do we act out the letters during the chorus – while running? Do you even need to ask?

Back half of loop four: My wandering thoughts hit upon the fact that while I’ve seen a few naked men running (including one guy in orange body paint), I have yet to see any women so (un)attired. Then a spectator says, “Hey, naked woman coming.”

Sure enough, a nicely proportioned woman wearing nothing but shoes soon passes me, smiling and entirely at ease. Another runner complains he’s getting warm. “Take your clothes off!” she yells to him. “You’ll be more comfortable!”

She stops at the coconut water station, so I go back ahead for a while. When she catches up to me again, I confirm she’s also on loop four, and I have to know. “Hey, you didn’t run the entire race this way, did you?”

Note: every woman I’ve told this story to goes wide-eyed and asks about whether “bouncing” wasn’t an issue. I’d wondered that too, but didn’t have the courage to ask. Apparently it didn’t bother her And she finished ahead of me.

At Pink Lightning after loop four, grabbing some snacks: I get a surprise hug from behind. It’s my daughter Rachel and her boyfriend there to cheer me on. “I’m so proud of you, Dad!” she says. (Hard to top a moment like that, folks.)

I take off for my final three miles, and they’re waiting at the finish line, where I cross at the 5:25 mark with my hands in the air – and promptly bonk in the pavilion. Here I am with her, doing my best to look happy while waiting for the Gatorade to kick in.

So, did it live up to my expectations? Since I didn’t really have any, the answer is Yes. Would I do it again? Sure, although I haven’t decided if I’d run it for a PR (nice and flat) or slow down and take photos. Plenty of time to decide!

As promised, here are some links to photos and videos of the BRC 50K from previous years. Enjoy!

YouTube – Running an Ultramarathon at Burning Man – from 2017. Really, this one is all you need to see what goes on. I didn’t see the stuffed animal trampoline this year, though.

Facebook – search on “Black Rock City ultramarathon” and a gallery will pop up. Here’s one of the photos.

4 thoughts on “An Ultra Like No Other: The Black Rock City 50K”