Life lessons can turn up when you least expect them.

Last Sunday I went to the Ann Arbor Track Club annual meeting and dinner. I was expecting a low-key, pleasant evening – pizza, salad, a few awards, socializing – and it was. But the evening was made special for me by two people who brought words of wisdom to share, not just about running, but about life, too. And I’d like to share some of it with you.

The invited keynote speaker was Ben Flanagan, a University of Michigan student who won the NCAA title in the 10,000 meters last June. His win was particularly remarkable because he’d had to come back from foot and back injuries that had sidelined him for the entire previous season.

“That brought a complete change of mindset,” he told us. He was a team captain, accustomed to leading by example and actively helping the team. Injured, he had to rely on others to help him recover, find a way to motivate himself through the rehab workouts, and change his goal from winning events to just getting back to the starting line. Which he did, and the following year earned a place in the NCAA finals.

At race time Ben was ranked 23rd out of the 24 runners there. You couldn’t fault the guy for just being happy to be there. Not Ben. He thought he could win. And he said so to Kevin Sullivan, his coach, preparing himself for a response like, “Well, let’s try for something more realistic.”

But Coach Sullivan said instead, “Yes, you can win. I know you can.” And he did, outkicking favorite Vincent Kiprop on the final lap to win by a half-second, and, incredibly, beating his previous best 10K time by over 30 seconds.

The key to his success, Ben said, “was having someone believe in him.” And he listed many – his  coach, his teammates, and perhaps above all, his mom, who he called for right after winning. (You can see the video below.) 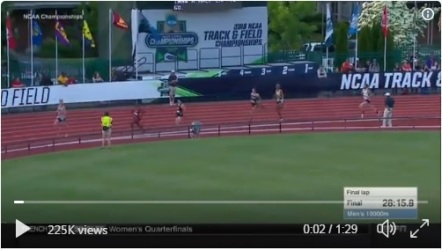 Then a very pleasant surprise occurred during the awards presentation, when my friend and fellow PR Run Club runner Michael Mester was awarded Male Athlete of the Year for his dedication to the AATC and participation on its Masters team (which, by the way, also wins a lot of events).

A humble and selfless guy, Michael was a bit overcome by the award, but was able to share what he called four “takeaways” that he’d had from the previous year that relate both to running and his life in general. I think they ring particularly true to those of us over 50, who have had the time to acquire some perspective on life, the universe, and everything.

My congratulations again to both of them. Sometimes good people get the recognition they deserve!

One thought on “Pizza and Life Lessons”