The 2013 Martian half marathon was memorable to me for three things: my fastest half marathon to date, the first time I won an age group award for a half marathon, and the first time I left a piece of clothing on the course. (Or maybe not? See below.) The weather was very much like last year’s – cold and overcast, threatening to rain. It didn’t – it snowed instead.

Due to heavy rains the week before, some of the usual course was flooded, and we ran an alternate route through subdivisions instead of up and back Hines Drive. Personally I liked it better, although it posed some challenges placing water stations – very important to the full marathon.

(I heard that the day before the race, the head guy was still thinking it could be held on the usual route, and he put a marked stick in the flooded area to see if the waters were receding. When he came back six hours later and found the stick totally submerged, he changed his mind.)

There were other surprises, too. When I got there, I couldn’t locate my name on the bib list, and they had no record of my registration. No problem – they registered me there, and I got a number. Then after I finished, I couldn’t find my results! My age had been entered incorrectly, and my time was posted in the 1-4 age group. The good news was that the corrected results put me second in the 50-54 age group – the first time I’ve broken the top 10 in a half marathon, and good for a spot in the top 100 overall, too.

But the most interesting event for me occurred after the race. Around mile 8 I’d taken off my hat and gloves and put them in my jacket pockets. I had this odd feeling that I’d lose my hat, so every so often I patted my pocket to make sure it was still there. (Yes, my jacket pockets have zippers. Don’t ask.) So as I cooled back off after I finished, I reached into my pockets – and my hat was missing.

I retraced my steps around the finish area but came up empty. Bummer – I’d gotten it as race swag at the Super 5K in February, and it had become my favorite hat. But like when I lost my cell phone at the trail 50K last September, I just had this feeling that things would work out.

I took some photos and then walked back to where my car was parked. I reached the main drag, Michigan Avenue, and started to cross – and there, lying in the road directly in front of me, was a hat. A Super 5K hat. I hadn’t dropped it there, as it wasn’t part of the race course. Had it followed me? Teleported? Had someone picked my hat up, only to drop it there later? Who knows, but the upshot is that I have a hat again. 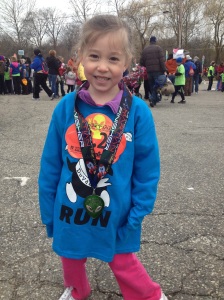 My friend Betty and her two oldest children also ran that day. She and her son Tony did the 5K and finished in around 37 minutes, a remarkable time considering that Tony is only 6 years old. Betty said he was so excited that he wants to run another race soon. Daughter Leilani, 4 (left), ran the Meteor Mile. They’re learning the love of running early! Or is it rather that they haven’t lost the love of running, like so many do when they “grow up”?

Next up: back to the trails, with the Road Ends 5 mile race on the Silver Lake trails this Sunday. Can’t wait to find out what I lose (or find) there.