Honored Beyond Words – But I’ll Do My Best

All I can say is – WOW. And thank you all so much.

Yesterday when I crossed the finish line at the Holiday Hustle 5K, I accomplished my goal of competing in every single event on the 2014 Running Fit calendar. It was a total of 23 events from January through December, including a snowshoe race, three triathlons, and six ultramarathons. Here’s the calendar (click it for a larger, more readable version):

No one has ever done this before, and throughout the year the wonderful staff at Running Fit Events cheered me on. And at each event I collected the little button pin. At each year’s Holiday Hustle, you bring your pins along, and the person with the most pins wins a prize. Since I had every 2014 pin, I was pretty sure I’d win, and I wanted to something more than just dump a pile of pins on them. So I put them on a posterboard along with some photos, to have something to display later in my man cave – when I get around to having one. So here’s what I made: 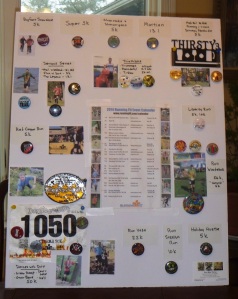 Well, it received oohs and aahs from the staff, and they said they’d put it on display after the race. Little did I know how polite they were being, as they made an oblique reference to a “special award” for me.

So I ran the race, and got congratulations all round. Then they showed me what they’d prepared for me as the first-ever “Most Valuable Runner”. Not only had they come up with that awesome title, I had been out-postered! Check this out. 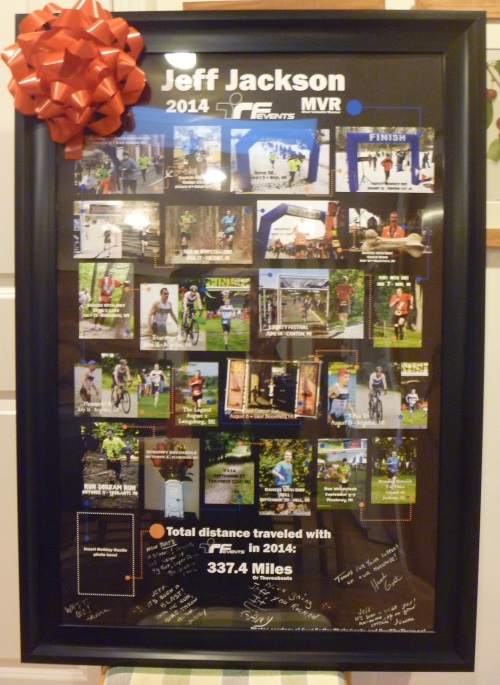 And I got a couple of free race entries, too!

I was speechless. This has got to be about the coolest thing I’ve ever received. This is going up on a wall even if I never get around to that man cave. Thank you Randy, and Mandy, and Dawn, and Joanna, and everyone else at Running Fit Events for helping make this year so memorable for me. And special thanks to my family and friends who helped me reach the goal despite some challenges in other areas of life this year. I love you all.

Coming up soon, I will recap the year in running, cycling, and Aikido, including the highlights of a truly remarkable and unforgettable experience. And lowlights too – those are more fun to read, aren’t they. Until then, thank you all very much once again.