Lighthouse 100 Recap, Part 2: The Long Night of the Sole

When last we left off, I had resumed my attempt to complete the Lighthouse 100 at mile 65 after coming within minutes of dropping out. A wonderful lady named Laura, crewing for another runner, had helped me recover enough to continue and said she’d see me again in 2.5 miles…

I made it the two and a half miles. It was a slog, but I was in good company. The wind was blowing so hard in our faces that running was a futile waste of energy. Laura was waiting for me. “How do you feel?” she asked.

I wasn’t well, but feeling better than I had. The Gatorade had revived me. And the sun and wind, having wreaked their havoc, had high-fived each other and were getting ready to call it a day.

“You can do this,” she replied firmly.

And with that, I was on my way again.

Aid stations 5 and 6 had been pretty quiet, with runners straggling in one or two at a time. AS7 was busy with staff and crew tending to runners taking an extended rest and dealing with injuries and stomach issues. Ultrarunners are generally stoic when asked how they are doing. I heard a couple respond, “Not good,” which meant they were really suffering.

By contrast, I was starting to feel like myself again. I found Laura and thanked her profusely for her assistance, and said I could go on by myself. Then I called my wife to let her know I’d be mostly walking the last thirty miles. I calculated to my surprise that even at walking pace, I still had a shot at finishing in 24 hours. So she could meet me at the lighthouse around 6 a.m., just like we’d originally planned.

It was just starting to get dark as I stepped onto the TART trail to begin the remaining ten miles to downtown Traverse City and the turn north up the peninsula.

It’s amazing how the mind can focus on a single subject, regardless of how one tries to suppress or divert it. Such was my case as I reached the suburbs of Traverse City. I needed to attend to a certain bodily function. Peeing in the woods is standard for ultrarunners, but number two, not so much.

Some runners don’t mind playing “bear in the woods” but I prefer an actual restroom, and I’d forgotten to bring along toilet paper anyway. The race organizers had not arranged for porta-potties because, we’d been told, there were gas stations and other places with toilets along the route. While true, their frequency did not meet expectations. And two factors complicated the issue; it was the middle of the night, and the trail ran along residential and industrial neighborhoods.

For several miles I carried on, hope rising when I saw lights ahead only to face disappointment when their source was either not open, or inappropriate (for example, the Burger King drive-thru). Civilization was everywhere, but – let’s just say the famous Rime of the Ancient Mariner quote came to mind.

Finally the trail reached a road with a Speedway station a few hundred yards away. My physical and mental relief belied description. 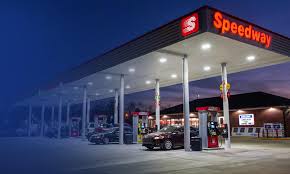 And my stop provided an unexpected benefit, for as I rejoined the trail I met up with five other runners. For the next fifteen miles we walked and jogged together, providing support and companionship very welcome on a dark trail late in the race.

“Do anybody else’s feet hurt as much as mine do?” Joe asked.

Our group had just left AS8 (Mile 80) and we had turned north at last, up the Old Mission Peninsula. The night hadn’t lowered the temperature much, but at least the wind was now at our backs.

Our unanimous answer to Joe’s question was, of course, yes. In a 100-mile race, every runner has sore feet by this point. Anyone who says otherwise is, to put it politely, a lying bastard. This was Joe’s first 100, so he was forgiven for thinking he was a weakling when in fact he was anything but.

There is Absolutely Nothing that fully prepares you for your first 100-miler. It doesn’t matter how much you’ve trained or how tough you think you are. It will push you physically and mentally well beyond whatever your limits were before. Just finishing, even five seconds before the cutoff, is an accomplishment well worth celebrating. And if you fall short? No shame. Lick your wounds, learn from it, and git ‘er done next time.

I didn’t know it when I took this photo, but I think this refers to the same Joe.

And for many runners it’s the first time they’ve run through the night. This can be intimidating and for some, claustrophobic. It’s hard to see very far, nothing looks familiar, and every noise is amplified (was that a raccoon, or a mountain lion?). Distances stretch out; one mile can seem like five. And even on clearly marked routes, an uneasiness sits in the back of the mind. Am I lost? How come I haven’t seen other runners? Where’s that damn aid station?

I usually enjoy night running, even solo, but I was very grateful for the company this time. I think we all were. For we all kept going, despite the pain, the lack of anything interesting to see, and that we still had many miles to go. We bitched and moaned, but we kept putting one foot in front of the other. Misery not only loves company, it needed company at that point. We broke up as the aid station approached, but we’d given each other the support we needed to get through the worst part.

All good things must come to an end.  – Wait, how does this apply here?

“You’re flirting with the top 10,” Dave the race director told me as I settled into a chair at the mile 91 aid station.

“Are you kidding me?” I said. “I melted down back there.” And so had everyone else, apparently. Only two runners had finished under 20 hours, and only a few more were ahead of me. My energy had returned around mile 85 and I’d been able to start running again. I’d passed a few people and was ahead of the group I’d been walking with.

“To hell with the top ten,” I said. “I’ve been looking forward to this chair for eleven miles, and I’m sitting in it a while.” And I did, chatting with the race staff and sipping iced Vernors. Almost heaven at that point.

When I finally stood up and jogged out of the aid station, an amazing thing had happened. The stomach trouble I’d had since early on was gone, my legs felt good, and I was full of energy. To top it off, there was a long downhill stretch ahead. Go time!

I went from a jog into a full steady run and held it. The course continued on downhill and then onto a gently curving road with hardly any intersections or residences. No one was visible either ahead or behind, adding spookiness to the dark, lonely Smokey Hollow Road – which sounded enough like “Sleepy Hollow” to do the trick.

Light finally appeared in the sky, and I emerged onto an open road and one of the final turns. I was almost home! But oops – the turn-by-turn directions I was carrying were wrong, indicating a right turn where going straight was correct. I spent 10-15 frustrating minutes figuring this out, but finally I saw the mile 95 water jug up ahead and just past that, the final turn onto US 27 leading straight to the lighthouse.

I covered the final miles in good time, and with no one around me, could enjoy them with no competitive pressures. I got to the lighthouse and crossed the finish line in 23 hours 53 minutes. And there was Joe! Sore feet and all, he’d finished the race and beaten me by over a half hour.

Even with the wrong turn mixup, I’d achieved my original goal of under 24 hours, and even won the male Masters division! Of course, the real accomplishment was finishing, given how close I’d come to dropping. Being able to come back from such a low point and finish strong tapped into a reserve I hadn’t known was there. What a great takeaway from the experience.

I’ll wrap up with a brief race review. Based on my story you might not believe this, but I’m going to recommend the Lighthouse 100 to my fellow ultrarunners. As with the first edition of any race it had challenges, but this event has the potential to become a classic.

The course is well marked and has some beautiful sections. The long stretches on US-31 and Elk Lake Road were hot and miserable, and I hope they can find alternative routes. Aid stations were okay, but did not have as much substantial food as other ultras I’ve run, and that plus the ten-mile separations were tough on the uncrewed runners.

I give the race director and his staff full marks for effort and attitude. They were on the course the entire time we were and remained supportive and upbeat. There was also a lot of communication and opportunities to ask questions before the race. They wanted very much to provide a great experience. The weather threw a monkey wrench into the works, but they had no control over that, of course.

Some changes for next year have already been announced. The biggest is the reversal of the course, a great idea that will allow running the Old Mission Peninsula in daylight and to finish in Petoskey, where it’s a quick trip to your hotel or a restaurant instead of a long shuttle ride back. And by popular demand, porta-potties will be at the aid stations.

I think next year’s Lighthouse races will be much improved and definitely worth considering for ultrarunners who enjoy, or want to check out, northern Michigan..