My first (and possibly only) ultramarathon of 2019 is done. I can’t say I enjoyed every mile, or even most of them. Yet I’m grateful for the experience. Lemme tell ya why.

It was worth it.

The race website quotes a runner as saying, “…they took all the hills [in Illinois] and put them ALL into one spot and called it McNaughton Park.” Having driven across Illinois, then run in the park, I can confirm this is true.

With 1,600 feet of elevation gain per ten-mile loop, I climbed nearly as much in 50 miles as I did at the Kettle Moraine 100. The uphills are sudden and steep, including one with rope assist. Yet they are exceeded in quad-shattering ferocity by the downhills, aptly described as, “elevator shafts.”

Two friends, John and Kurt, were responsible for my presence there. Kurt was attempting the 150-miler (15 loops), while John would try the 200, a 20-loop exercise in torture which awards a belt buckle too big to wear. This I wanted to witness. I settled on Saturday’s 50-miler as my limit after an inconsistent winter of training, but I was there to see them off at 4 p.m. Thursday.

On Friday I volunteered at the base camp aid station, ran a few miles to keep loose, and went to bed early. I headed down the muddy path at 6:00 Saturday morning fired up and feeling good.

The first loop, messy, slippery, and still a bit dark, was quite fun. I completed it in two hours flat, which I was very pleased with. No PR here, but even with a shoe change or two I expected to finish in around 11 hours. That plan went south starting late in the second loop.

A burning sensation appeared in my lower abdomen, almost like needing to pee, except I didn’t. This had happened at the Lighthouse 100, which I’d blamed on an unfamiliar electrolyte drink. I’d stuck with familiar food and drink this time, but here was that pain again, and getting worse.

Not wanting to quit, I pressed on and began experimenting. I tried drinking less, then a lot. I consumed more salt. I tried eating and not eating. After loop three I sat for a while. Nothing made any difference whatever. Even ginger ale and a Tums had zero effect. The day was pleasant and the trail was drying out nicely, but the constant pain was ruining any chance of enjoyment.

I made it through lap four (40 miles) and collapsed into a chair next to the timer. “Ready for your victory lap, Jeff?” he asked. No, I was not. In fact, I felt a tingling in my hands and flush in my face that signaled a bonk coming on. I got to my feet, walked to a nearby grassy patch and lay down for a nap. Plenty of time for one. Heck, with race cutoff over 24 hours away, I could even leave, recover, sleep, and finish the next day. I dozed for about twenty minutes with the afternoon sun warm on my face and body.

When I got up, a miracle had occurred. The abdominal pain had vanished, and I was full of energy. Victory lap on! I walked the first mile just to be sure all was well, then ran the rest of it comfortably. With competitive pressure gone, and feeling well again, I was able to fully enjoy those final miles. I finished just as it was getting dark. At 13-plus hours it was my slowest 50, but I was satisfied. And grateful. 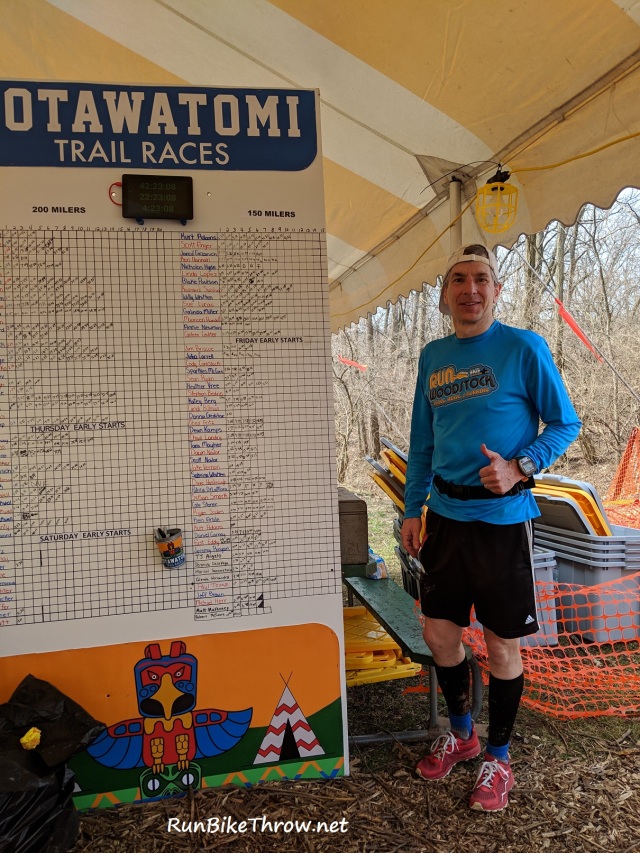 So what made the experience worthwhile? I learned I could push through a long period of discomfort. That I can use a bad situation to learn more about myself and what I’m capable of.

Also, two things stood out about how my body performed. Though my quads were screaming from the downhills, they held up, and everything else – glutes, hamstrings, calves, even knees – felt fine throughout. And on a steep, muddy trail, I didn’t fall once. I give full credit to the trainers at Body Specs for their attention to whole-body training and stability work. All those one-legged squats and work on the wobble boards paid off. Thanks, Skip and crew!

And how did my friends doing the crazy miles make out? Mixed results. John’s attempt at 200 ended after five loops and a rainy, miserable night. He was understandably bummed, but is already looking forward to his next challenge. Kurt finished his 150 miles at 7:30 a.m. Sunday, one of three to complete that distance. And four runners actually completed the full 200. Outstanding work, guys. I am in awe.

2 thoughts on “Gut Check at the Potawatomi 50”