RUNNING WORLD, BEWARE! I AM NOMAX, THE BREAKER OF RULES.

Running, like many activities, has well-known “rules” everyone can recite and that the periodicals periodically parrot. Such as, “9 Things You Should Never Do Before Running” and other such click bait implying that breaking them will wreck your training and cause your <insert favorite body part here> to fall off.

In the space of a week recently I broke not one, but THREE rules regarding running and racing. I’m not saying they were particularly smart things to do, but I lived to tell about it.

Unless, of course, it is Pi Day (3/14) and there is a race involving pie. Really good pie. And you’re stupid ambitious enough to enter the “Eat & Run” division, where you have to eat some pie before running.

Well, seasoned ultrarunners like me are used to eating and running. What’s one little piece of pie before a puny little 5K? 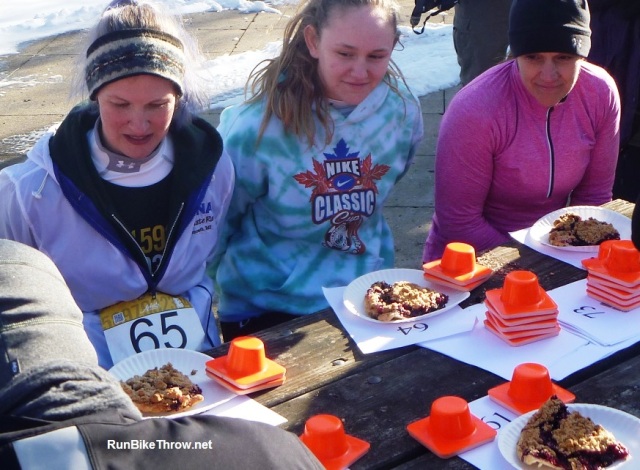 Yep, that’s one quarter of an entire pie. Which you must eat without using hands. And there’s a time penalty for not finishing. So there was nothing for it but to – well, see below. 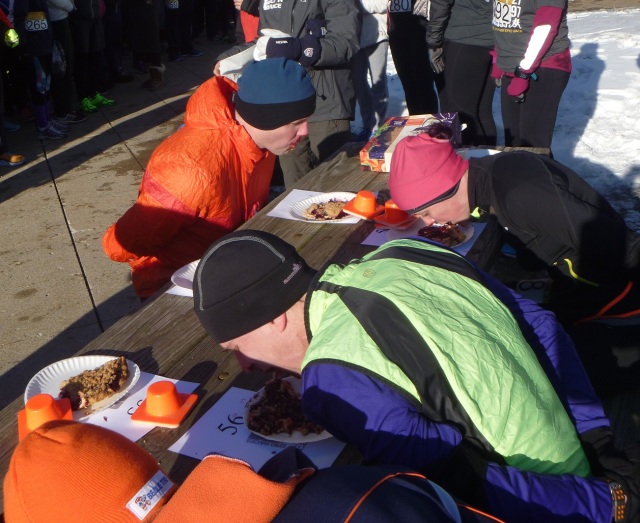 And hell, if you’re going that far, might as well go all the way, with a “pie in the face” at the finish line.

The result? I finished second. Can’t wait for the Pizza Race!

Last Saturday I went to my favorite running store and bought me a new pair of road shoes. They fit well, and they felt good in the store. So the next day, I took them on a test run. Fortwentythreemiles.

See, I have some long road races this year, and my lightweight, minimally cushioned shoes weren’t gonna cut it. And the only way to know if the shoes will work for a long run is – to take them on a long run.

Now I did take some precautions. I taped my heels, took a spare pair of socks, and stopped halfway through for a gear check. But everything went smoothly, with much less leg fatigue than I was expecting. I think these shoes will work fine. But I’ll do a few short runs in them just to be sure.

3.  Don’t Run an Ultramarathon in the Desert in the Middle of Summer

(Surprisingly, this is NOT one of the 9 Things. Perhaps it’s too obvious even for this type of article.)

Okay, so I admit that the Badwater Ultra – 135 miles in Death Valley in July – is not a good idea for most people (if anyone). Definitely not on my radar. But a lil ‘ol 50K in Nevada at the end of August? Sure, why not?

And so I will be running the Burning Man 50K this year. This week I took the first step by registering for next week’s ticket sale. Assuming I get one, it is ON! All I need to do is figure out how I’m going to live for a week in the desert with no electricity, only the food and water I bring, and deal with possible 100-degree heat the entire time. And stay healthy enough to run a 50K in the bargain.

Now the karma believers among you may think I’ve stretched the rubber band about as far as I can, and it’s just a matter of time before the inevitable snap back. If and when that happens, I’ll humbly apologize to the universe here on this blog.

But until then, I’ll do my best to not break rule #9 – Doubt Yourself. Running, after all, is as much a mental exercise as it is physical. So go ahead and break some supposed rule now and then, if it makes you stronger in some way. I’ll be the last one to report you!